Priya mitharwal was my "Maitri ".When she said that,she has sent me the mystery ingredient.Immediately I told her that,I will check my mail box from the next day.But she controlled my curiousity by telling that it would reach me only the next week :( .Sadly started waiting for the parcel to come.From that day on ,I was pesturing my H to check the mail box.He was puzzled by my behaviour.Bcoz, I will never ever go to the mailbox,even if my H gives the key and asks to check it.

Finally the day arrived.I recieved a beautiful measuring spoon set and the mystery ingredient.Priya has also sent a parcel to Reshmi.Since it was barley,I thought then it would be different for me.So I proudly sent a message to Priya that it is "Wheat".She replied back saying "no".Then only I understood that the same barley has been sent to me .My H gave a lot of tissues  to wipe off my ignorance. 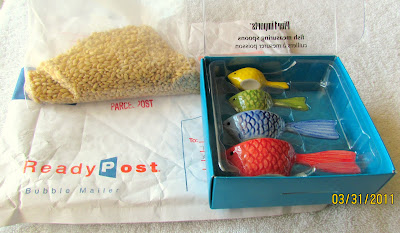 This particular recipe is from "Zesty South Indian Kitchen",who is well known for her baking abilities.Her Honey wheat bread is the basic source.But I have totally replaced the wheat flour  with barley flour.This is an ultimate healthy break fast for all ages.As we are using honey,it has a sweet nature and the oats adds a crunch.The bread was crumble,moist.I have used yeast for the fermentation.But I prefer to use baking soda in furute than the yeast.Bcoz  barley is a firm grain,it will be more soft if we  replace yeast by baking soda.Here I have taken half the quantity of the original recipe.If u want a bigger loaf,then go  ahead and use full quantity. 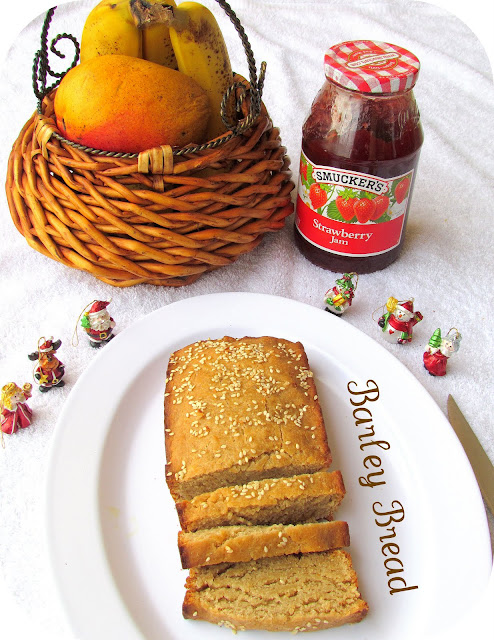 Method:
* Take yeast and sugar in warm water and mix it.Keep it aside for 10 minutes.
*  The mix shud become frothy.
*  Take a mixing bowl,add flour,honey,oats,yeast mix ,salt and oil.
* Knead it  into a soft ,yet pilable dough.
* Cover it with a damp cloth and keep it in a warm place to ferment. 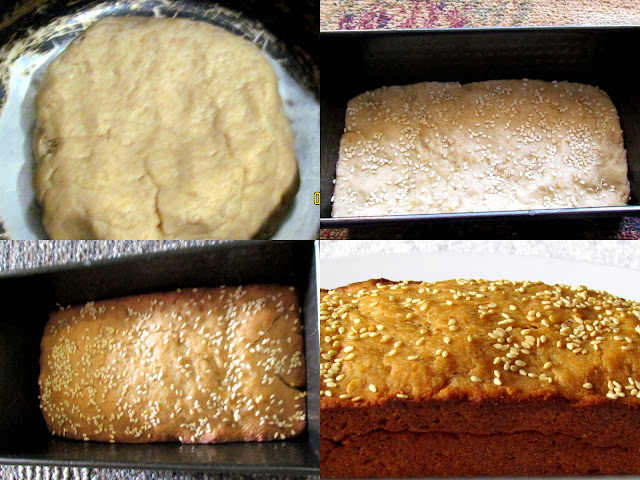 * I know ,I am using the term fermentation.Bcoz barley flour will not raise a lot.
* After 1 1/2 hrs,take the dough and punch it.
* Grease a bread tin ,like in the picture and place the dough inside the tin.
* Let it get set for 30 more minutes.
* Pre heat the oven for 350 degrees for 3o minutes.
* Now sprinkle and press the sesame seeds on the bread.
* Bake for 50 minutes ,at 350 degrees.
* After 30 minutes,cover the tin with a aluminium foil.This will prevent the upper crust from hardening.

When the bread is golden brown in colour,then take it out cool completely.Slice them and serve with butter and jam.This is an ultimate healthy break fast.

Note:
* Dont wait for the dough to raise.Though we have used yeast,it wont raise.This is because of the barley flour.If u want ur bread to raise a bit,then add baking pwdr.
* Dont keep the bread longer than specified amount of time in the oven,bcoz ur bread may become hard ,if the time exceeds.
* Bread will not be like our normal bread.This one has slightly crumble in nature.So dont get panic.

Savi,superaa bread dear, btw how come u have forgotten my barley event for breakfast, do mail them to me dear, eventhough the event is over,am planning the roundup for next week,i dont want to miss this wonderful bread,quite useful for many of us to try and taste na...

Here is my announcment,do link and mail me soon..

Healthy & love the aroma & flavor of freshly baked bread!! I have an award waiting for u in my blog..do collect it :)
Prathima Rao
Prats Corner

Bread looks so soft and healthy!! seasame seeds on top adds a nice falvor to the bread..Great recipe!!

looks so yummy and healthy! perfectly made.

Barely bread look so well baked.What a healthy way to start the day.

Barley bread looks delicious, i think it is not risen because it is has not much gluten from all purpose flour. Thanks for taking inspiration from honey wheat bread.

Savitha if you want a rise in the bread, then you need swap the ingredients other way, means 1 cup all purpose flour and 1/2 cup barley flour. Barley is hard flour it is not easy for yeast to consume at fast pace. so we need to give them some boost.

If you want to use barley flour alone try Rieska which is barley bread of Finland which is flat bread similar to our roti or nan, I haven't tried though, so don't know how it taste. This Rieska is made with yeast/baking soda or none.

its come out too good!...love it!
Smitha
Smitha's Spicy Flavors

It's power-packed with nutrients and it came out lovely!

bread looks delicious,..luv the presentation too,.

wow Savitha, what a great job dear, amazing. Glad that you liked the ingredient and your goodies as well :)

Thank u friends for ur wonderful support and strength.

Interesting ingredient you got there, beautiful and healthy bread.

What a lovely looking loaf and full of goodness of barley - bookmarked dear :)