On the fourth day of our blogging marathon, under the theme "Occasions" ,I am going to give the recipe of  most famous Kashmiri dish "Dum aloo". This dish plays a vital role in Kashmiri marriages. The name derives from, aloo or potatoes are cooked as a whole in the sauce and kept in dum .Though I was browsing through several recipes, Kitchen Secrets's recipe was quite impressive. So I adapted from hers.But while frying the onion puree ,care should be taken ,if it is not fried properly, then it may taste bitter. So I added honey.Adjust the amount of spices and honey according to your taste. Check out the Blogging Marathon page for the other Blogging Marathoners doing BM#27 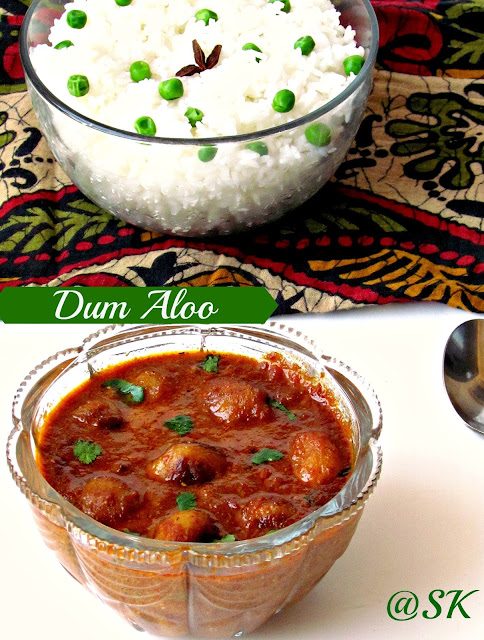 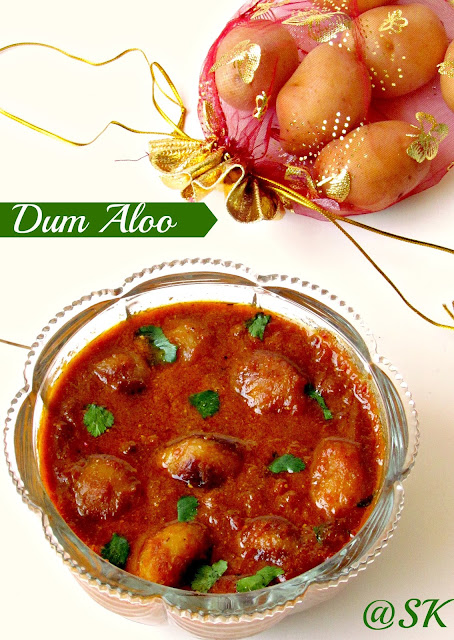 Method:
* Wash the baby potatoes ,add a pinch of turmeric pwdr and pressure cook for 1 whistle.When the pressure is completely released,remove them from water immediately,if not the potatoes will absorb water and become soggy.Peel the skin off  and slit the baby potatoes .This makes the potatoes absorb the sauce.We can also pierce them with fork,but slitting works well.Mean while ,chop the onion and make puree.Similarly with tomatoes.

* Take a wide pan,add little oil and fry the potatoes partially.That is the potatoes should turn golden brown in all sides.Traditionally,potatoes are deep fried in oil, but I would like to partially fry it.You can think me as health freek, yes I am :) Once the potatoes are fried,keep them aside.

* In the same pan,add oil, splutter with bay leaf,cinnamon sticks and cloves. When they are fried, and leaves out fragrance,now dump in the onion paste and fry it.The onion paste should fry well and become light brown. If not the curry will have bitter taste .Add the ginger paste and sauté till it looses the raw smell.Now add the masala powders.Sprinkle some salt and sauté the onion along with the onion paste.Onion should leave out oil.

* Now add the tomatoe puree and mix with the onion. Saute well and add the beaten yogurt .While adding the yogurt ,make sure the flame is very low, if not the yogurt will separate its fat.Once the sauce becomes thick,add the fried potatoes along with green chillies. Cover the sauce and cook it in low flame ,till the gravy leaves out oil. Now add honey to the gravy.Adjust salt to taste.The potatoes should absorb the sauce, while cooking .During this process, tightly cover the pan. The gravy should cook in dum for atleast 10 minutes in low flame.. 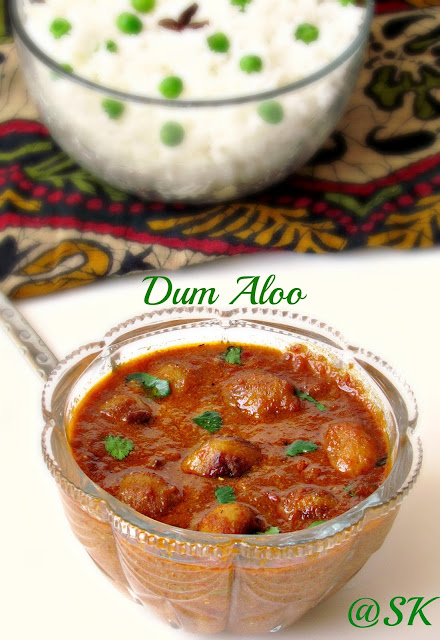 Looks scrumptious and good presentation as well. Thanks for trying from my space n giving credits for that..

The name of the recipe sort of rings the bell and after reading through, I am right, its made from potatoes.

That plenty ingredients - the spices are so good and the color is oozing out in flavors.

Dum Aloo looks so delicious and temping. do visit me too.

The dish looks very inviting and love the pouch used as a potato sack. :)

Wow awesome pics all I can say and You are a pro in cooking :)

Dum aloo has turned out wonderful. The pulao on the side also looks great..

The recipe is surely very interesting..like the addition of honey...book marked.

Dum aloo Looks great. The potatoes in the bag was a great Idea, looks exotic. Btw, I too have posted aloo dum today!

You have so many good recipes, Love your blog! I'm happy to follow you, you can visit my blog when you find time :)
http://kitchenista-welcometomykitchen.blogspot.com