Today is day -3 of Blogging Marathon #25 started by Srivalli . Today I am going to post on the alphabet "N" ,Naan with garlic butter or garlic naan.I have tried several recipes of naan,but this particular recipe is the one,which gave me complete satisfaction - restaurant style soft and light naans.I got this recipe from youtube video.This naan retains its soft texture,after several hours of cooking.Adding garlic powder,gives a fantastic aroma to the naan.I assure ,you that this recipe will quench your thirst for restaurant style naans.Try it !! 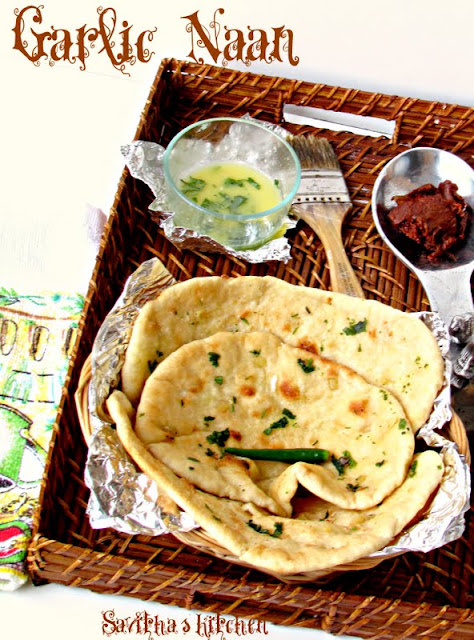 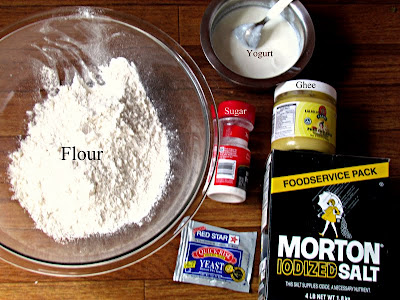 Method:
For garlic butter:
* Take a pan,add butter and heat it.
* Now add crushed garlic and saute till ,butter gets infused with the garlic flavor.
* Now add chopped cilantro.Let it cool. 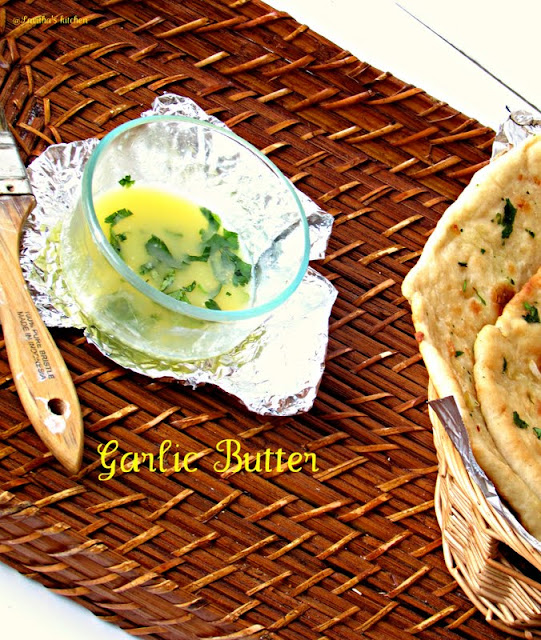 For cooking naan:
* Bring yogurt to room temperature.That is keep yogurt on the kitchen counter for atleast 2 hours.This step is very much needed,because when yeast is added,it won't work well with chilled yogurt.This will result in hard and chewy naans.The amount of yogurt needed in this recipe is a must.This will help us to obtain soft and fluffy naans.
* Take yeast in a cup of warm water and let it dissolve well  and form a foamy liquid.The water should be warm not hot.If not yeast will die in that hot water.If you are using rapid rise yeast like me,then you ccan directly add the yeast to the flour,instead of dissolving in water.Melt ghee and keep it aside.Adding ghee will make the naan soft ,for long .We have to just heat it before serving. 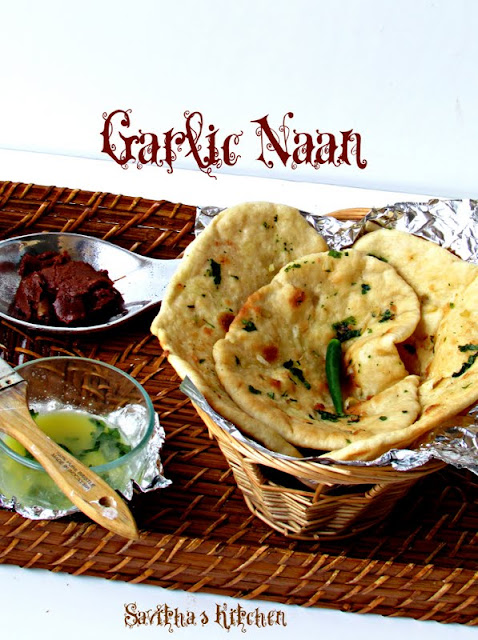 * Take a mixing bowl,add flour,sugar ,salt,yogurt,melted ghee and yeast into it.Now knead the dough well.Since we had added yogurt,the dough will be bit sticky and soft.Grease another bowl with oil
and place the dough for rising in a warm place.Cover it with a cling wrap or a damp cloth.I kept my dough in the oven ,with just the light on.Let it rise atleast for half an hour or untill ,it doubles in its size.

* Pre heat the oven to the maximum temperature.My oven had 500 degrees Farenhiet as max.So kept it at that.Place a pan or cookie sheet inside the oven and pre heat it .This is the trick,which makes the oven like a tandoor.So the cookie tray will be very hot ,when we place our naans.This helps us in fluffy naans ,also we have to have a close watch on the naan ,as it may blacken quickly.
* Now take the dough on a floured surface and punch down the air.Divide it into equal sized balls .Let it rise again for atleast 20 mins.Now roll each ball into a medium sized naan on a floured surface.We can either roll it like a triangle or oblang shaped ones.We can also shape them into one big round naan and can divide it into pieces.Make medium sized naans,not so thin ,not so thick.

* Now brush the garlic butter on the naan liberally.At this stage,the garlic pods may come out of the naan.So gently press the minced garlic into the naan.Since we are brushing with butter ,before cooking,this helps us in getting beautifull brown spots on the naan.Slightly sprinkle finely chopped cilantro.Cover with a damp cloth and let it rise for 5 to 10 minutes.Now place the naan into the heated cookie tray.
* Cook the naan for 3 minutes or untill ,we see the naan bubbling as in the picture.At this point,when we move the naan,it should move freely,as it has cooked well.If it doesn't move,then the naan is not cooked ,so leave it for 1 more minute.

* Now change the setting to broil mode in the oven and cook for 2 more minutes or untill,you see brown spots on the naan.Remove the naans immediately ,if not it will become crisp and hard.Brush again with some butter .Repaeat this for other naans also.Oven settings differ from to another,so cook accordingly.Serve with paneer or chicken gravy. 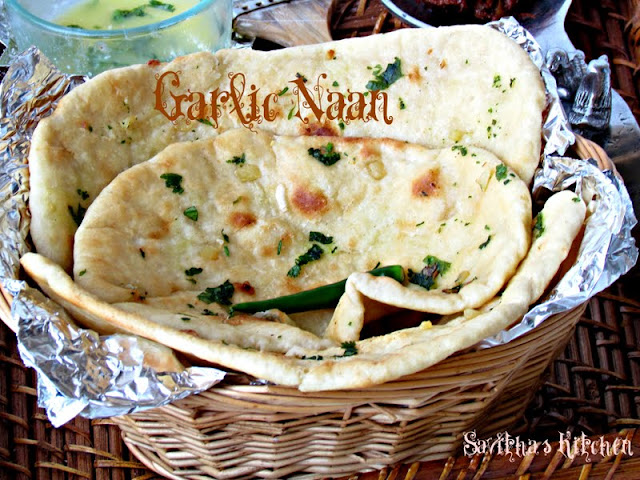 Check my other naan recipe made on stove top....

what an awesome effort, the naans have come out perfect!

thanks for sharing step-by-steps savitha.. it looks beautiful..

I love naan you have made it soft.I kind of get it little crispy..hmm so its def restaurant style will bookmark it.

Delicious Nann, Sure I will try your recipe. I love it, but never tried at home.

The naans do look absolutely lovely, Savitha. Soft and ready to be devoured!
I am bookmarking this!

Wow! Couldn't take my eyes off the first snap. I love garlic naan and your recipe looks like a great one to start...

Perfectly made garlic naans,drooling over the pictures...

Garlic butter flavours sure give nice enhancement to the dish...all together superb...

wonderfully detailed post. Loved the step by step pics and comments everywhere about the whys and hows. Superb!

Wow super Savitha. This is one of my fav. Looks perfect.

perfectly made naans!! I heard they brush the naans with egg in restaurants, is it true? I understand they do it so they stay soft.

This is a prefect Naan. However I am not a fan of garlic naan but the husband sure is. Cant wait to give it a try.

So nicely done! I liked all the pictures. I have switched on to stove top for making naans, I find it easier with better results. But your oven cooked naan too looks soft & good and not brittle like mine turned out to be.

wow!! bookmarking this. the naan lukks too gud.

Great... Will defi try..have a doubt... . In which mode it should cooked first before keeping it in broil??? Pls clarify...

First cook the naan in bake mode and then turn it to broil mode.

WOW.... This is a very nice recipe. Looks so good. Nice picture. So tempting...
restaurant in satya niketan

Thanks for all your efforts that you have put in this. very interesting information.
Order Online Food Delhi

That garlic naan dish looks so amazing. Perfect dish to make on the grill. Will try some time.
order online food delhi

Your blog is very informative and gracefully
your guideline is very good.Thank you.Please visit in chowringhee laxminagar Restaurant for test and variety in kathi roll..
chowringhee laxmi nagar