Tandoor naan is my all time favourite.We used to crave for naans in  India,But I have not tried there.After coming to US,started trying this out at home.Previously used to prepare on the tava.It will be soft ,but I was not able to get that smoky naans with brown spots.I was searching thru net to get a tandoor effect for naans.Then came to know the procedure of  making tandoor naans at home thru a you tube video.Cooking naan on a flame is impossible,here as we have electric heaters.So I used the technique of using pans - covering the stove.It gave the naans brown spots and smoky flavour.This method is bit time consuming,but the outcome is so perfect . 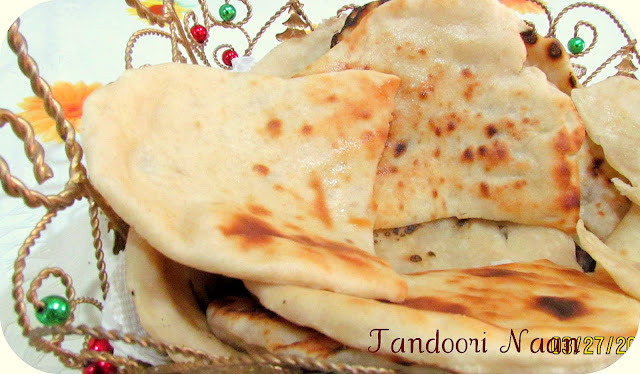 Method:
Preparing  the Dough:
* Take the luke warm water ,add sugar and yeast.Mix and keep it aside for 10 mins.
* After 10 mins,the mix would have become frothy.
* Take a mixing bowl,add flour,salt and curd.
* Crumble it well and now add the yeast water .
* Knead  it into a firm ,yet soft dough.
* Add oil to the dough and cover with a wet towel.
* Keep the dough in a warm place for 2 hrs or untill it doubles in size.
*  Divide the dough into equal sized balls. 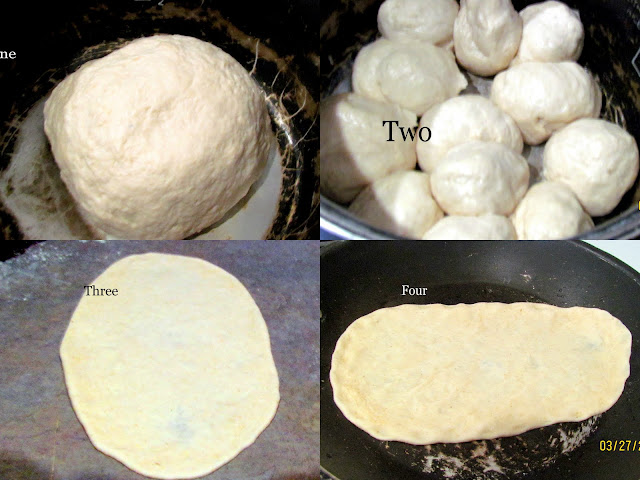 Rolling the naan:
After dividing the dough,let it rest for half an hour.This will make the balls again double in size.But I used a technique to reduce the time.I started rolling each ball and cooking it simultaneously.Instead of rolling all the balls and cooking it in a batch.This helps  other balls to raise in the mean time.
The picture shows theraised balls.

* Sprinkle  wheat flour and roll the balls into a medium thicknessed rotis.Using wheat flour for dusting ,helps  naan to spread a bit.
* Pull it into a oval shaped naan.

Cooking the naan in tandoor effect:
* Take a heavy bottomed pan.Apply water to one side of the naan and press it into the pan as shown in the  picture four.
* Now, turn on the stove to high ,place the naan pressed pan upside down .As shown in the picture five.The pan should cover the stove completely.This will create a tandoor effect,where naan gets cooked with smoke and  some fire spottings like the  picture six. 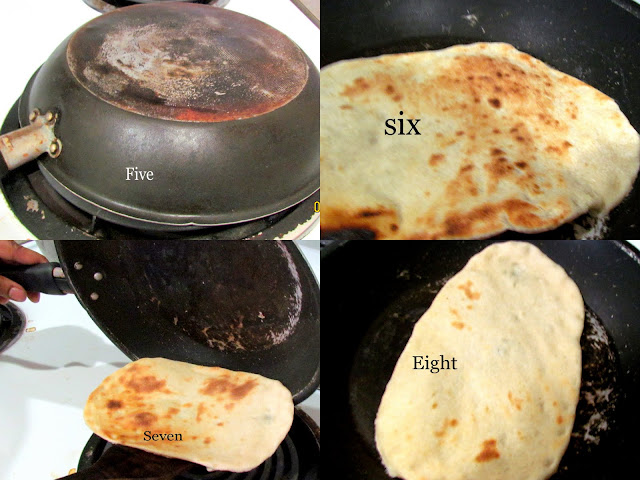 * When the naan gets cooked 90 % ,it will come out of the pan.Make sure that it doesn't fall on the stove .If so, naan will start burning ,after fallen on top of the coil.
* Now turn the naan and cook for a minute  on top of the flame ,with the help of the spatula as shown in the seventh picture.Dont over cook the naan,then it will become hard.
* The eighth picture shows the naan cooked on the other side.

Immediately apply butter or oil and cut the naan into 2.Serve it with any side dish.

Note:
* Instead of using pans,we can also use small pressure pans,which has heavy bottomed.
* Once the naan is cooked on the first side,ther others side will be cooked quickly.So dont keep it on the flame too much.Dont try to cook the naan on the tava .It shud be cooked on top of the flame.
* Since we have electric stoves,I have used this method.In India,we have gas burners.So we can show the naan directly on the flame,instead of covering it on the stove.


Sending this to Ayeesha's A.W.E.D Indian Cuisine started by D.K The Naan look super perfect and soft and yummy.

Nice presentation....I too make in tawa to get the tandoor effect...

This is indeed a great tip Savi..I also have coil stove so this is really useful to me.. Gonna try soon...

Lovely so now I can make Naan at home..
Love them!!

I love naan and just gobble them up with any side dish and when made at home would be perfect and healthy too.. urs has come out perfect...
You have an award waiting in my blog... Pls collect it...
http://vimithaa.blogspot.com/2011/03/its-raining-awards.html

Naans look so perfect... the method of preparation is new but from the outcome, I can c that it is the right way to do it ..
Reva

That involves lot of patience and hardwork Savitha.The first photograph tempting me to go kitchen and try some !! such golden cuties there..Yeah friend,when we go out of the country,we will try anything hard to get that taste of nation..That's the spirit..love,

Thanks for posting soon de, Sure am gonna try this method de ..Tremendous effort that shows ur passion and ur interest u r putting in

Great way to make home made Nans.Loved the pictorial it was helpful.

Indeed the first photo is very tempting and can push anybody to get going into the kitchen and make them... Was just planning to prepare some naans since a few days with mutton curry ( thats how it is most preferred at my place ) but was just being too lazy... That first pic has given me the required kick.... :-D Only thing I hate while preparing this kindo naans are the ulta tawa style.. we call it ulte taway ka naan.... The pics are quite yummy..... it seems they are teasing us... yum.. yum.. yum.....

Naan looks so professionally made Savitha :)

Never say no to Naans, urs looks super prefect and more inviting than the restaurant ones..

The Naan look super perfect and soft and yummy.

what an awesome effort, the naans have come out perfect!

loved it ! naan is one of my favorites !I'm going to bookmark it !

I would never say no to this soft naan with some curries, your tawa version looks really great. Beautiful pictures. Thank you dear for making this wonderful entry to AWED :)

A little bit of everything said...

Your naan looks great. I'd love a couple for my lunch tomorrow.
thanks for sharing

Wht an awesome idea! it look so classy and appealing.
ammaandbaby.blogspot.com/

Thanks for the tutorial and yours looks perfect and yummy!

chef and her kitchen said...

chef and her kitchen said...

Award is waiting for u in my Blog
Collect it

These look perfect Savitha....Just like fresh out of the tandoor!!! Superb!!
Prathima rao
Prats Corner

soft n delicious naan and thanks for sharing ..

There are a few awards for you...Please collect it from my space...

Your recipes look delicious! I'm Jill from an American recipe sharing website called Gourmandize, and I would be interested in setting up a short interview with you to feature on our site as 'Blogger of the Day'. If you are interested please email me back at jill@gourmandize.com.

Looking forward to hearing from you!