Today is the fourth day of  "7 days Blogging marathon "  started by Srivalli.Today I have selected the theme "Kids friendly recipe".Today I am going to present u ,my sons favourite,Cinnamon sticks.This recipe has a long recap .
We used to go to a mall near grapevine.Whenever ,we go there,we used to buy cinnamon sticks in "Annie and auntie" store.They have wonderful cinnamon sticks,which will be very warm,soft and sprinkled with lot of cinnamon sugar.My son loves it a lot and a very big fan of it.So whenever we go there,I used to watch the girl making cinnamon sticks.She is very profesional and used to prepare 25 to 30 sticks within 10 mins.I used to watch her.This gave me an inspiration and started searching for recipes.Once ,I came to know that, pizza dough can be used to prepare these sticks.So this marathon gave me a chance to recreate those we had in that store.
My hubby was delighted after having those spongy cinnamon sticks and rohith started sprinkling cinnamon - sugar mixture and njoyed well.Give it a try, ur kids will surely njoy. 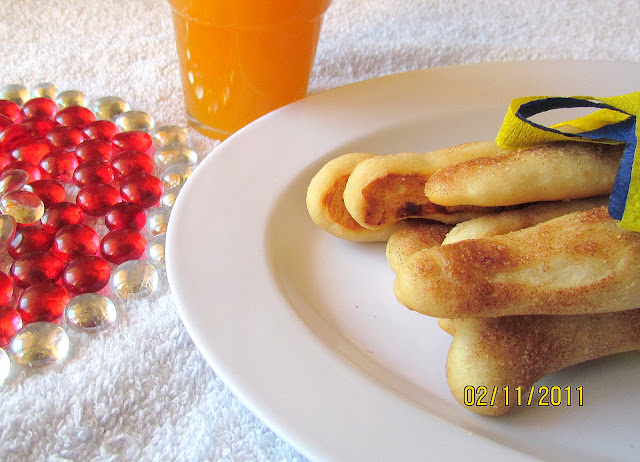 For the dough:
* Take a cup add yeast and warm water.Let it dissolve becoming a frothy liquid.
* Take a mixing bowl,add the flour,salt and yeast water.
*  Knead it into a soft dough by addin oil to it.
*  Let it sit there covered by plastic wrap for 2 - 3 hrs or untill it doubles. 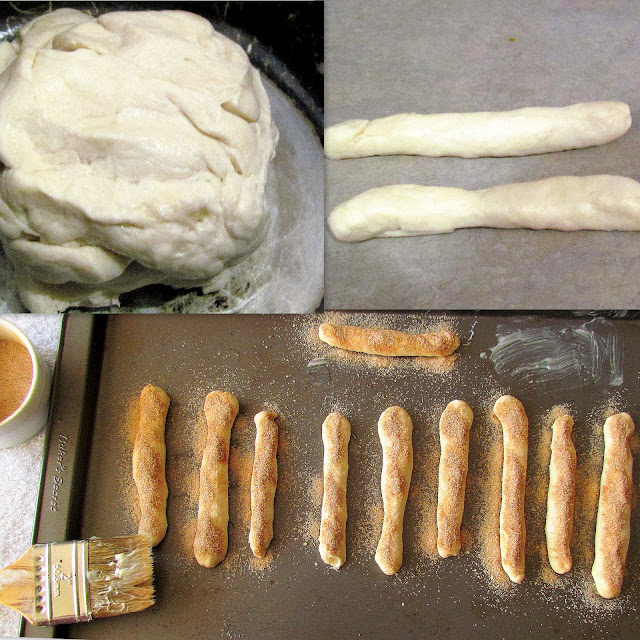 Shaping:
* After 3 hrs,take out the dough and knead it again,without any cracks.
* Divide the dough into small equal parts and roll it as  shown above.
* Make sure the length is even.But I had some irregularities ,which I wud concentrate next time.
* If we roll them in large bulky piece,then it wud blow bigger after baking.So inorder to get a stick like shape ,roll them thinly.

Baking:
* Take a cup and mix sugar and cinnamon pwdr together.
* Take a cookie sheet, grease with butter and arrange the sticks in a row ,with intervals.
* Now brush the sticks with butter and sprinkle the cinnamon mixture.
* Keep the remaining pwdr for giving a final touch.
* Pre heat the oven for 400 degrees and keep the tray and bake for 10 - 12 mins or untill it turns golden brown.
* After 5 mins,take out the tray and brush it again with butter.
* This helps the sticks to retain its softness. 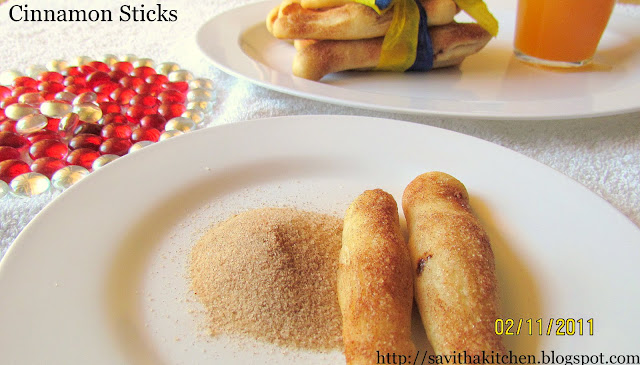 Serving tips:
* We can bake it days ahead .
* While serving,just heat it in the microwave ,sprinkle some sugar and serve.
My son loved it a lot.Its bcoz ,lot of sugar sprinkled on it.
Note:
We can also brush with cold water instead of using butter.The reason is ,we need a binding agent thats it.It can either be butter or cold water.But I prefer butter,as it gives that color and texture.

Sending this to  Pari's "Only cooking with - Bread event " 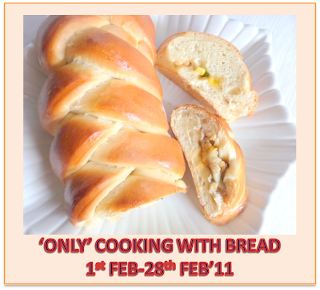 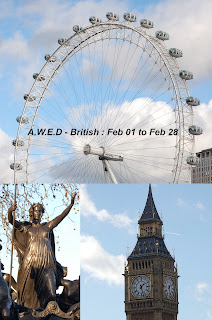 Yummm. love the flavour of cinnamon. bookmarking this:-)

That looks so good with the flavor of cinnamon.

This is lovely.. your presentation is just amazing ... Is that the real brush that u used to apply butter on these sticks???? .... it is a very clever prop to use for photography ... good one..
Reva

Oh wow....this looks so good. Reminds me of cinnabon.

4 sure i will try this..
Cinnamon sticks looks totally yummy...!

Am an addict to bakes prepared with cinnamon,those sticks tempts me a lot..

its Yummy. Love it
Cook Healthy

you know Savitha, when we are at the Dulles airport at DC, we always check in and make a pi-tstop at Cinnabon for these - I am sure homemade was heaps better :)

Love the aroma of cinnamon in breads.. and love the way your arranged the pebbles to the side to give some contrasting color to the picture!

Savi, tempting pics.. Am also a biggest of cinnamon sticks, am gonna make it toooo.

thank u gals.thank u for ur support....
@Usha,thank u ..it just came in my mind accidently,after seeing some pebbles for our fish tank

@ Reva,s it is the real brush with butter

wow yum! I had these in sfo and they are so delicious!

those look good!...my kids like these...I will try to make it soon
Smitha
http://smithasspicyflavors.blogspot.com

Perfect!! I have eaten these but didn't have the recipe. Bookmarked!

Wow simply superb.. Can I have some?:)

Looks so tempting...Sure do try it...

Nice one. During this marathon, I have created a folder and put it on my desk top to note down the delicious dishes I am coming across. Your recipe went in there before I left a comment here. :)

wow, what a wonderful dessert/snack. My son loves these stuff from Taco Bell. These look very very tempting.

lovely blog and cinnamon sticks are just too good, nice pics,
first time here and loved it
happy to follow you