During the festival of Navratri in South Indiaa it is customary in the states of Tamil Nadu, Kerala, Andhra Pradesh and Karnataka, as well as in some Tamil communities within Sri Lanka, to display"Golu" .These display ,teaches kids about the custom and stories about  the god.
When people come to a person's house to see the Kolu, usually they are given prasadam (the offering given to God that day), kumkum and a small bag of gifts. These are only given to girls and married women. In the evenings, a "kuthuvilakku" (small lamp) is lit, in the middle of a decorated "kolam", before the Kolu Kolu is displayed for 9 days (nights) ,they are called navaratri. 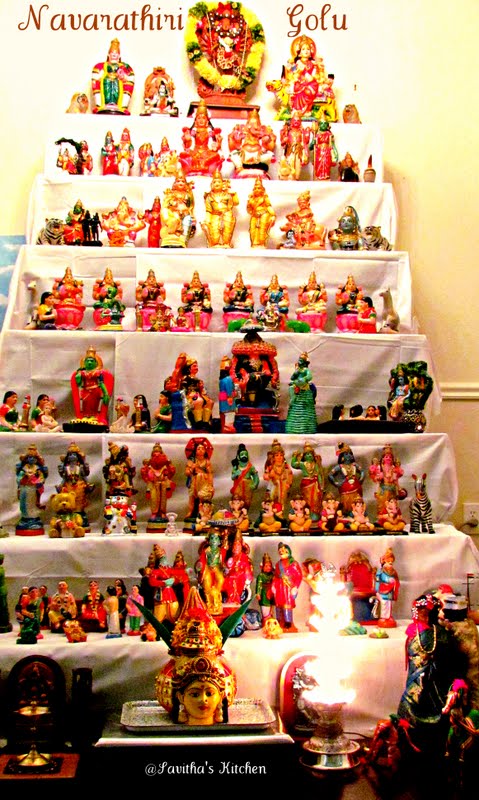 On the 9th day (Saraswati Puja), special pujas are offered to Goddess Saraswati – the divine source of wisdom and enlightenment. Books and musical instruments are placed in the puja and worshipped as a source of knowledge. Also, tools are placed in the pooja as part of "Ayudha Pooja". Vehicles are washed and decorated, and puja is performed for them.
The 10th day, "Vijayadasami" – is the most auspicious day of all. It was the day on which evil was finally destroyed by good. It marks a new and prosperous beginning. New ventures started on this day are believed to flourish and bring prosperity.  In the evening of "Vijayadasami", any one doll from the "Golu" is symbolically put to sleep and the Kalasam is moved a bit towards North to mark the end of that year's Navaratri Golu.These are the interesting facts about Kolu from wikipedia.
Recently, we were invited for a Golu at my friend Gayathri's house.This is my first Kolu in US.So I was impressed with the theme and the display.I wanted to write a post elaborately to show and teach Rohith about the custom and story behind each god.So here is the display of all the gods .

﻿
Kalasam is the main feature of Kolu.Where it is decorated as the goddess's face and offered poojas daily.Where deeparadhanai is performed daily for this kalasam. 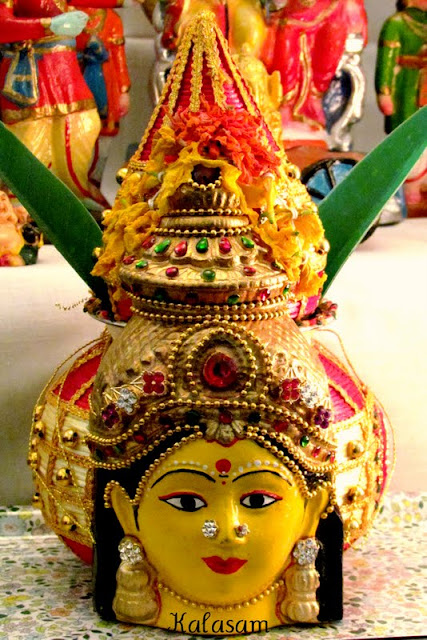 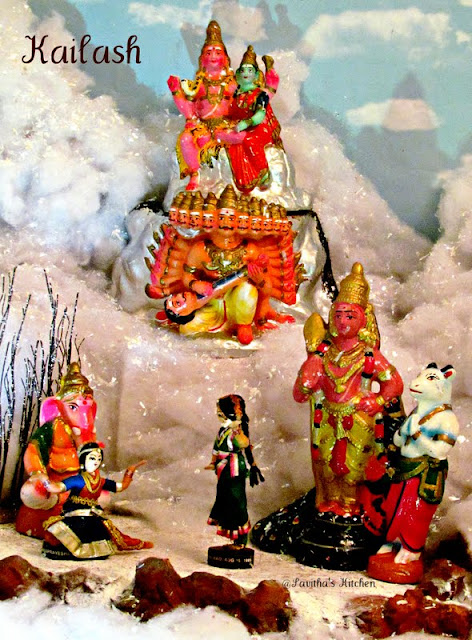 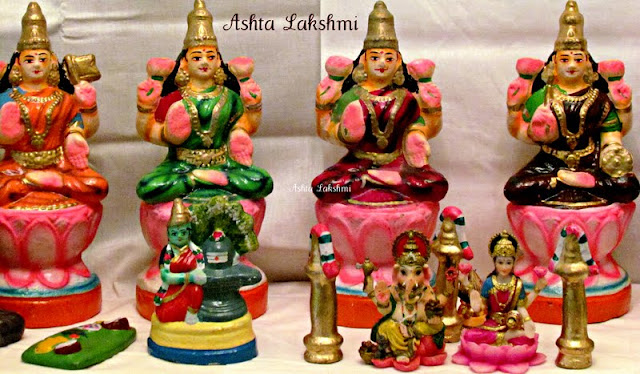 This particular display depicts a scene from "Rmayanam",where Lord Hanuman forms a chair for himself ,with his tail as he was not offered a chair at Ravanan's Court. Lord Hanuman, has come to talk about Sita. 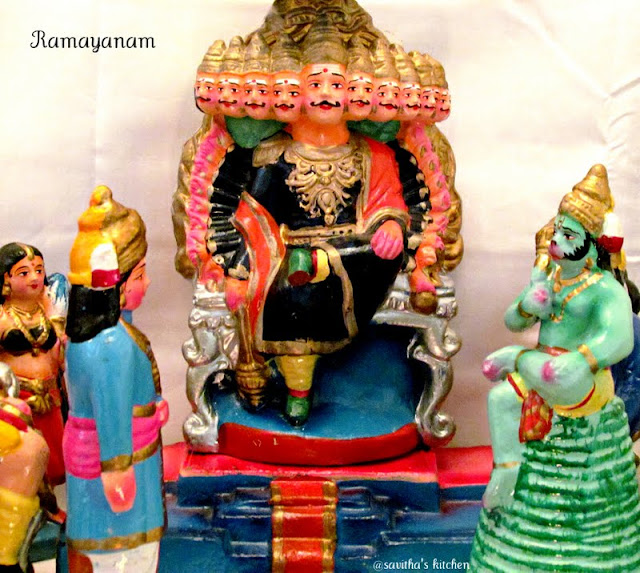 Dasavatharam is the ten incarnations took by Lord Vishnu to save the world.  Here are they.

* Matsya Avatar  - Lord vishnu ,took a fish avatar to destroy a asuran,who stole all the vedas and shastras form the pandits.
*Koorma Avatar - In this,Lord vishnu took a tortoise( Koorma) avatar ,to balance the mountain while the devas and asuras started churning the ocean to get "Amirtham"

*Varaha Avatar - Lord vishnu took a Pig (Varaha ) avatar to save the earth ,which was hidden by the asura named "Hiranyaksha"
*Narasimha Avatar - Lord Vishnu took this Lion avatar to save his devotee "Pragaladha " from his demon father "Hiranyakasibu"
*Vamana Avatar - This is the fifth incarnation of Lord Vishnu ,who become like a vaman ( A dwarf ) to destroy the arrogance of "Mahaballi ".Lord vishnu,disguised as a vamana and asked 3 foot land.One foot of Badhala Logam,one foot of mel logam and mahabali gave his head for the third foot.This way,Mahaballi lost his arrogance and the wish to conquer all the world.

* Parasurama Avatar - This is the sixth avatar of Lord Vishnu,where he took that of a obedient son Parasurama.
* Rama Avatar - This avatar is also known as Dharma Avatar ,to tell the world that one should have only one wife and should also be loyal to her.

Here is Madhurai Meenakshi,enjoying the vilakku  pooja offered by Sumangalis at her temple. 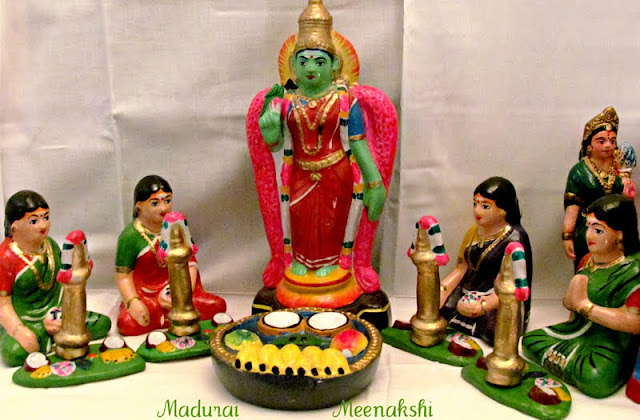 Pittuku Mann Sumandha Kadhai:
This is very intersting story about Lord Siva at "Thiruvanaikkal Temple" . The King wanted to build a temple for Lord Shiva.He ordered all the house hold to send a man to work as a labourer.There was one lady,who was old cannot go and work.So she asked a man,who was walking near her house to go for the temple's work ,in turn he will get Pittu ( A sweet dish ) for his work. 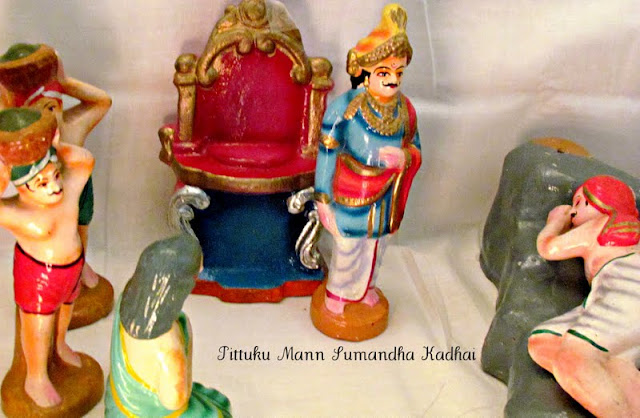 This man,went to the temple,and danced,slept without working.The supervisor got angry and whipped him ,immediately the pain was felt by all the people in the world.Yes the man who worked for pittu is Lord Shiva .And he came to help that old lady and to shower the blessings to the people.

Here is the beautiful statues of Lord Rama,Lakshmana and Sita,with Lord Hanuman. 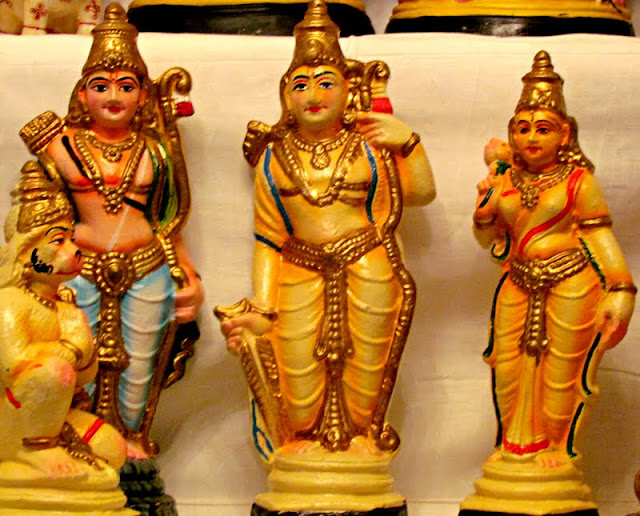 Radhe and Krishna , having good time together, swinging on a swing.... 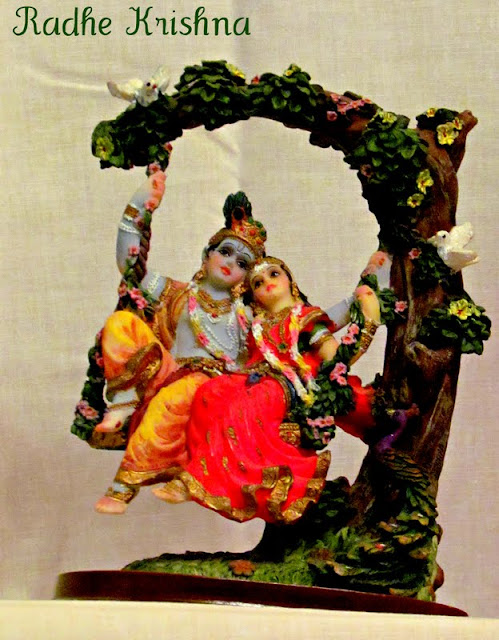 Here are the different kind of vinayagar statues playing the musical instruments.

This set of dolls ,depicts the marriage ceremony of Hindu people.Where the bride and the groom are dressed in dhotis and sarees.They were seated in front of the kalasam to tie the holy thread " thaali".With friends and relatives offering blessings. 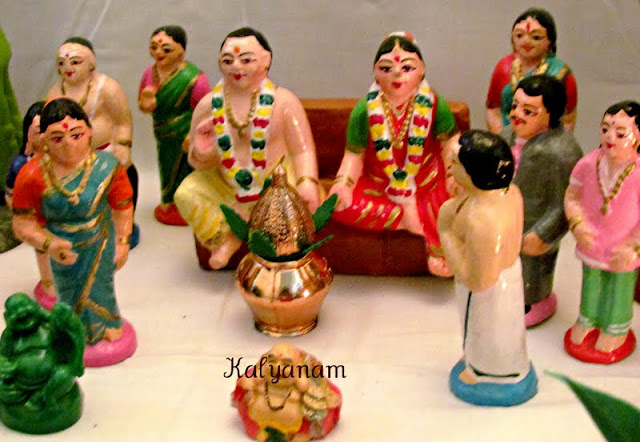 This set ,displays the jungle with  lot of animals. 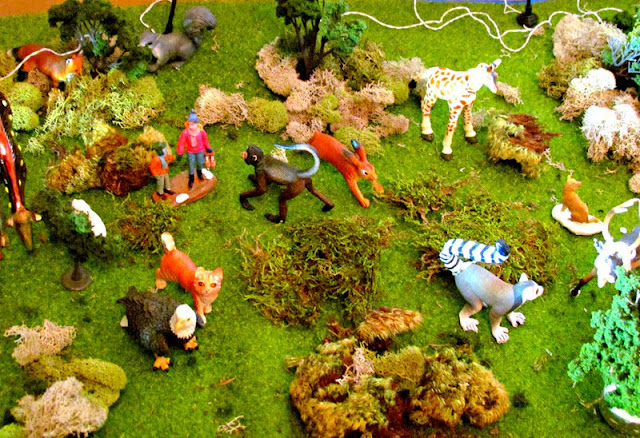 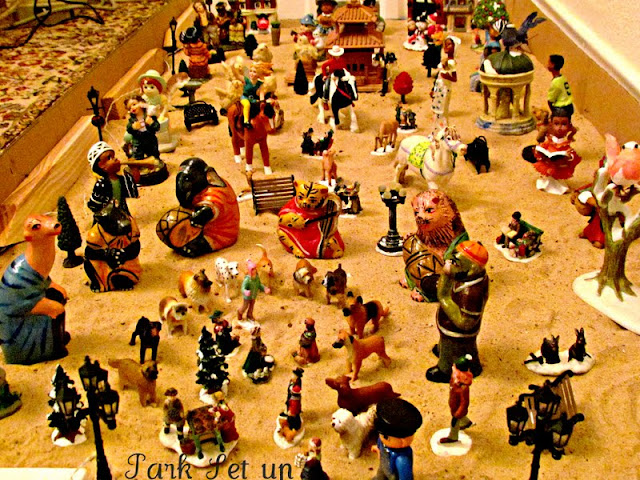 These are the pictures I wanted to share with u people .While preparing for this post,I referred so many sites and learnt a lot about vedas.Its like brushing my memory .I was so happy to learn and share my knowledge about the custom of displaying Kolu.I am very much thankfull to Gayathri's family for thier invitation .We enjoyed full south Indian meal at thier house  after visiting the Golu.
Posted by Unknown at 12:28 PM

Thanks Renu.It was a pleasant surprise to have u in my blog,posting comment.

Savitha, nice article.. My sister does it too I hv fwded this link to her.. Thanks for sharing
great-secret-of-life.blogspot.com

Shubh Navaratri to u n ur family...Wonderful n beautiful kolu...

Thank u all. Its pleasure having u all here.

Wow Kalakiting Savitha, beautifully done and great job dear..Loved reading this detailed post, will share it with my cousin Sis,she was asking me about Navarathiri and all, as she was born & brought up here.

Wow..nice coverage on kolu..I luv that krishna and radha in swing ;)