Tiramisu is a heavenly Italian layered cake. I got to know about this cake ,thru my friend Sho ,who used to tell about the cake often. That made me to try this cake at " Carinos " restaurant last year. I was totally lost in its taste. When I was searching for  a cake recipe for My H's b day,this cake caught my eyes. The process was very easy ,with little steps. So wanted to try this recipe from "show me the curry" video.The original recipe called in for lady fingure,which I was not able to find .So used the white sponge cake as the base. We can either buy a cake mix and use it.Or we can just prepare a basic vanilla cake and use it as a base.But if you were able to get the lady fingure,then just immerse it in the coffee and arrange it as a base .The coffee flavour was tremendous and the silky cream gave a fabulous touch to the cake .Usually rum is added with coffee for a royal touch,but I have omitted that .H was completely satisfied with the cake and I was happy too.When I took it to the party,the bowl was emptied  pretty soon.Tiramisu made my day,we had a blast . 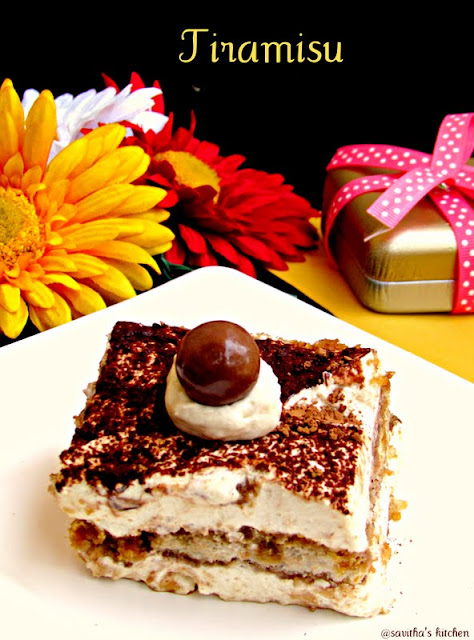 
﻿﻿ Method:
For preparing sponge cake:
The original recipe called for lady fingure.Since I was not able to find that,used the alternative white sponge cake.It was a super duper hit.You can also make the sponge cake from the scratch and the recipe is here ,basic vanilla cake .Take half the measurements for preparing the cake as we need a thin layer only.I was too busy to do it from the scratch.So used store bought mix as it was so easy.I bought pillsburry white cake mix and followed the procedure to bake the cake.You can buy any cake mix and follow the procedure in the box.
* Preheat the oven to 350 degree F .
* Grease a square pan with butter and flour it with a all purpose flour.
* Separate the egg yolks from the white .Keep the yolks, for the cream topping ..
* Take a mixing bowl,add egg whites,oil and water.
* Beat it really well,untill it forms a frothy mix.﻿
﻿* Measure the cake mix and take half of it.
* Add the cake mix into the mixing bowl and gently fold in.
* Pour the mixture into the greased cake pan and tap it to spread evenly.
* Bake the cake for 25 to 30 mins or untill tooth pick comes out clean.
* Cool the cake completely on a wire rack.

Preparing strong coffee:
* Take 1 1/2 cups of water and bring it to boil.
﻿﻿﻿﻿﻿﻿﻿* Now the water should be reduced to 1 cup.
* Add instant coffee to the water,leave it for 1/2 a minute and cover it.I have used bru coffee,but you can use any instant coffee powder.
* Turn off the stove and cool completely.

﻿﻿ Method for the cream topping:
* Take a mixing bowl ,add cream cheese and 3 tbsp sugar.Mix it using a hand blender well,till the sugar gets dissolved into the cheese.
* We have the remaining egg yolks ,after preparing the white sponge cake.Take a bowl and mix the yolks with 3 tbsp of sugar.Mix it real good ,till the sugar is dissolved in the egg yolk.
﻿﻿ ﻿﻿﻿﻿﻿﻿﻿ ﻿ ﻿﻿﻿﻿ ﻿﻿ ﻿
* Now we are going to cook the egg yolk in double boiler method.Take a pan of water and bring it to rolling boil. Now place the egg yolk bowl on top of the boiling water ,so that the bowl touches the hot water and whisk the egg yolks well.Dont stop mixing ,if not the egg yolk will  scramble .
* Whisk the egg yolk for a minute or untill the dark yellow colour of the yolk  becomes pale yellow.
* Pour the egg yolk immediately into the cream cheese and mix it as shown in the picture.
* Pour 2 1/2 tbsp of coffee into the bowl and mix it.
﻿* Now dump in the whipped cream into the bowl and mix it .
* Mix well.so that all the ingredients are blend together.

Layering the Tiramisu:
* Take a serving dish with a lid.
* Cut the sponge cake into two halves horizontally.
* Place one half inside the dish.
* Take a kitchen brush ,dip in the coffee and smudge the cake completely as shown in the pic.But dont pour the coffee,there are chances for the cake to disintergrate.
* Scoop the cream topping and spread it evenly on the cake as in pic.Save some cream topping for garnishing the tiramisu.

* Take a tea strainer and sprinkle the unsweetened cocoa powder evenly on top of the cream layer.
* Now repeat the layering process ,by keeping the other half of sponge cake,spreading the cream  and sprinkling the unsweetend cocoa powder.
* Close the lid tightly and refrigerate for minimum 8 hours or overnight.

Serving suggestions:
* While serving ,cut the cake carefully , with a knife .
* Scoop the saved cream topping and place it on the cake.
* Top it with brown chocolate and sprinkle some powdered sugar.
* Dig into the heavenly Tiramisu and enjoy your day.

﻿Chef's Note:
* Care should be taken ,when we mix the egg yolk .in the double boiler,as there are chances for the egg to  scramble.
* I felt that the cream topping had more whipped cream,so we can reduce the whipped cream to 11/4 cup.
* We can also use mascrapone  cheese instead of cream cheese.But mascrapone is difficult to find.
* We can also add rum to the strong coffee and smudge the cake.It will give an extra flavour to the cake.
* Sprinkling bournvita instead of cocoa powder is a superb alternative.
* Once the cake is refrigerated,then dont disturb the cake.Because,any changes like sprinkling of additional cocoa powder will not work,after the cake is set.
Posted by Unknown at 5:16 PM

Wow,looks too good. Loved the illustrative clicks.Thanks for sharing a wonderful recipe.

Truly that's such an easy method to make yummy tiramisu.Too yummy to resist.

best wishes to your hubby- tiramisu looks so spectacular !

Looks so delicious....love the instant cake mix idea too

Definitely tiramisu are fabulous and my fav dessert, you made it super prefectly Savi.

thanks for posting this recipe.. this is one tiramisu recipe which does not have the " unknown ingredients"...

I have heard abt this but never tried or tasted. looks so nice. u did well..

Belated birthday wishes to ur hubby de.. Asusual u rock gal..Great effort and it really paid off.

Spice up the Curry said...

wow. this looks just awesome. I can have this right now

At your free time do visit my blog and give your valuable comments:)

Oh wow...that looks absolutely delicious! i love tiramisu! so rich and wonderful! thanks for sharing!

I would be so happy if some made this luscious cake for my b'day.Perfect looking Tiramisu.

This is one cake that I would like to challenge myself with. I always envy those who attempted at it and is a success..Yours look good enuf to eat out of the pics! Until I conquer in making a successful tiramisu, I shall find pleasure in saying that 'it's easy' but until then, hmmm...glad to follow you too!

Oo yumm! Wish i cud grab a slice! this has been in my todo list for a long long time:-(