I am wishing all my friends,fellow bloggers,Readers a very happy  "Karthigai Deepam".Its a festival of lights,where our homes are decorated with earthern lamps .My MIL used to prepare Karthigai Pori (Pori urundai) for neivedhyam.Pori urundai is prepared by adding pori to the jaggery syrup.Taking jaggery syrup is the key in making pori urundai.Practice makes the process very easy.We take the syrup as of adhirasam.After 2 failiures ,I got this pori urundai,a success.First time,my syrup went so hard,I couldn't make balls.Second time,It was watery ,my pori were flattened.But I tried it again ,with my MIL's advice.She asked me to prepare it in the ratio 1kg pori : 250 gm jaggery.Since its so much for my small family,used 4 cups : 3/4 cup ratio.It worked very well.Try it :) 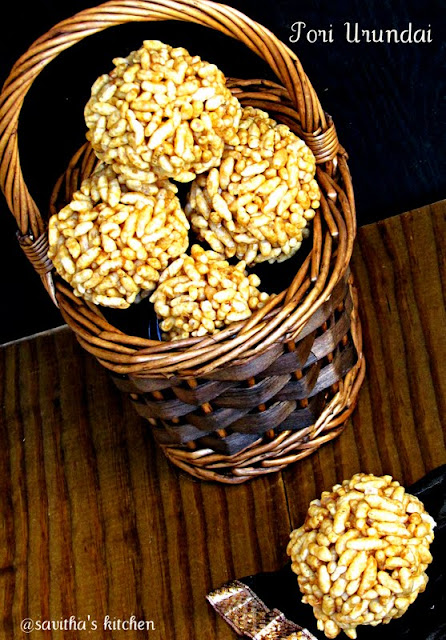 Ingredients:
1.Pori or Mamra -  4 cups
2.Jaggery( powdered)  -   3/4 cup
3.Pottukadalai or fried bengal gram - 1 tbsp
4.Coconut pieces    -      1 tbsp
5.Water                   -       1/2 cup or as needed
6.Ghee                     -       2 tsp
Method:
*.Take a mixing bowl,add pori,pottukadalai,and keep it aside.
*.Take a pan and dry roast the coconut flakes finely.Keep it aside.After it is cooled,add it to the pori or mamra.
* Now take jaggery in a kadai or a pan.Don't take too heavy bottomed pan for taking syrup.Because it can withstand the heat ,and it may change the consistancy of the syrup quickly.So use a medium bottomed pan.
* Cover the jaggery with water and turn the stove to medium heat.
* When the jaggery is completley melted,take a strainer and strain the syrup for any impurities.
* Now bring the syrup to boil and turn the stove to medium low.Because from now on ,we can get the soft ball consistancy anytime .Take a cup of water to check the consistancy.
* The syrup will be foaming now.Take a spoon of syrup ,and pour it to  the water.When we touch the syrup,it should not dissappear in the water.It should be firm,and we take that in our hand,it should form a soft ball.This is the right consistancy. 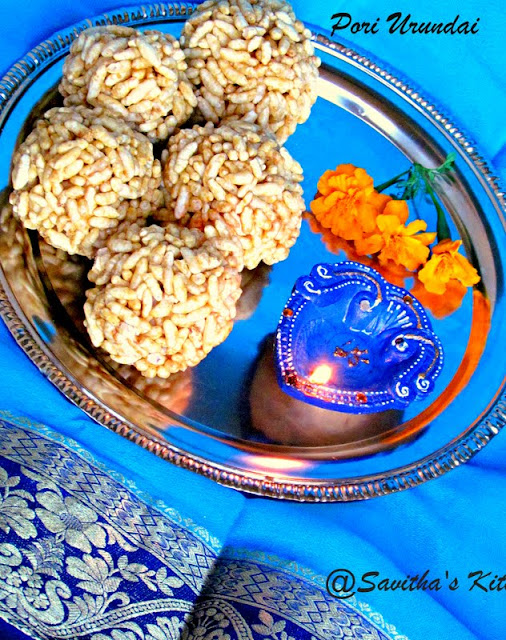 * The other way to check the consistancy is ,when we drop the ball fastly,it should give a thud sound.
* Immediately turn off the stove and transfer the syrup to the pori mixture.If you are using electric stoves.then take the pan immediately from it and place some where else.As electric stoves have coil,which can withstand heat for long..Take a spoon and mix the jaggery well with the pori.Leave for 2 to 3 minutes not so long.
* Now grease your hands with ghee and start rolling the pori mixture into balls.We have to be very quick in making the balls,as the pori will become hard as time passes.
* Even after greasing your hand with ghee,if you feel that the pori sticks to your hands and not able to make it into balls.Then the other way to make the balls without sticking is,just wet your hands with water and try rolling the urundai.It will help.
*When the urundais are cooled ,store in air tight containers. 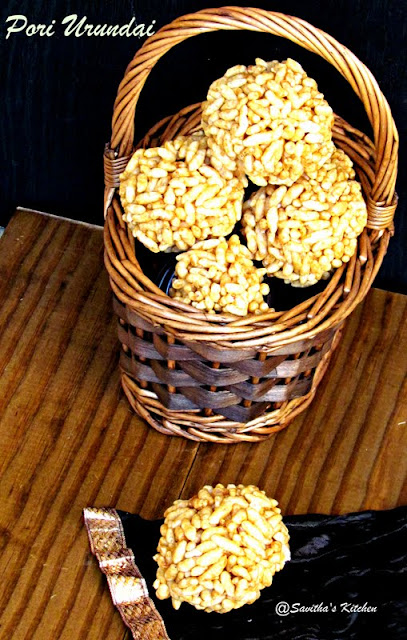 Sending this to Saras's Kitchen's "Dish in 30 minutes: sweets" 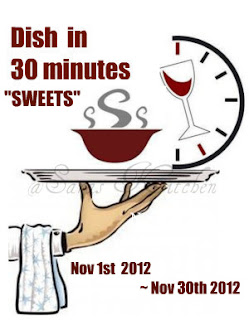 You made it perfectly Savitha ant thanks for re-posting the peda recipe.
Saras
Dish In 30 minutes event with Giveaway

Good to know that you were happy this time with the results ..looks perfect

Happy Kartigai Deepam- Like the poori urundai came out good.

Thanks for the entry dear..

Our Neck of the Woods said...

Looks delicious and very pretty! I bet it tastes so good. Thanks for sharing!