Recently we visited Chinese Lantern festival at Dallas Trade fair Park.It was a fascinating world of lanterns.We cannot take our eyes off each lanterns.We were astonished by  the craftsmanship of the Chinese . The artful pieces that make up the Chinese Lantern Festival are a collection of lanterns made of silky cloth, glass, and porcelain. Construction of this exceptional exhibit originated in China, where a team of more than 100 artisans and technical staff did preliminary work in Sichuan. Small completed pieces and raw materials were shipped by sea to the U.S.,  where a team of more than 40 arrived from China to construct the majority of the exhibits on-site. Working long days in 100-plus degree heat, they succeeded in creating a showcase of the world's foremost lantern-makers.


Lantern Riddles:
Lantern riddles are riddles that were written on the lanterns that are displayed during the Chinese Lantern Festival. People in the festival must guess the answer from a word , a poem or a phrase, guessing the riddles are as hard as fighting with a tiger, so that lantern riddles have another name - ‘lantern tigers’ .
Some example of Lantern Riddles
Riddles: What’s full of holes but still holds water?
Answer: a sponge
Riddles: What building has the most stories?
Answer: A Library 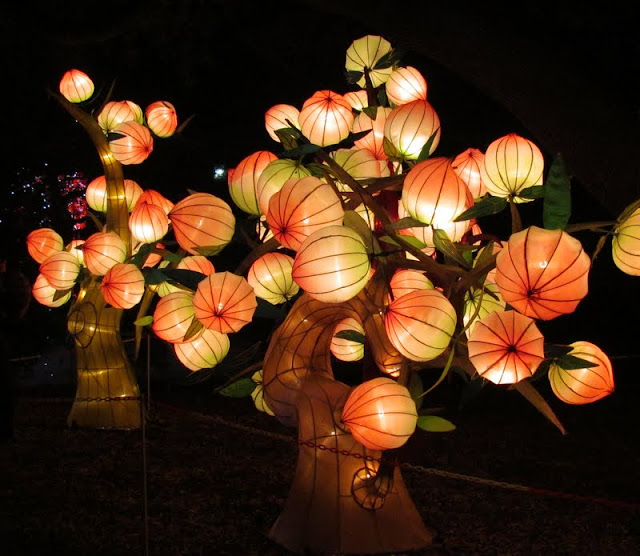 Lanterns made like peach orchard
History:.
At the earlier period of Western Han, Emperor Hanwendi stated the Jan. 15th of lunar calendar as the Lantern Festival, when he subjugated successfully the insurgency of Zhulu. Since the first Lantern Festival in Hanwudi (156B.C—87B.C.), every year at this time, emperor would offer sacrifice to the Heaven, Buddhist would light lamps to elucidate Buddhism, Taoist would sacrifice the deities Taiyi and Sanguan, common people would hold lamps and candles to chase rat, look at the silkworms and pray for big harvest and no disaster. Therefore, lamp, candle and fire gradually became scenery on the day of Lantern Festival.So we can say Han Dynasty is one of the most important Dynasty for the Formation of the Lantern Festival.

When we came into the festival,our eyes were caught by these small creatures.Pandas were lit with colourful lights.They were created like infants playing together.It was a wonderful sight to see. 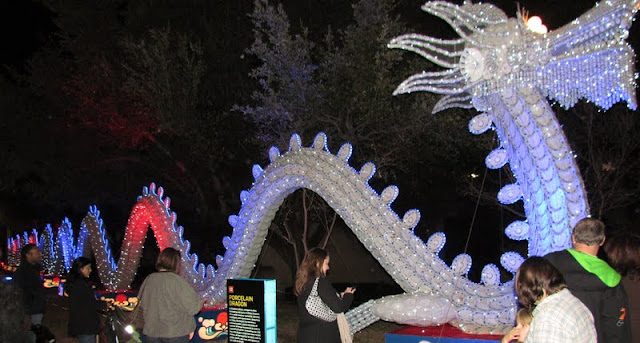 Among the 22 giant exhibits,this porcelin dragon is the one which portrays the hard work.A porcelain dragon stretching 330 feet, made from 15,000 bowls, spoons, and wine cups...all tied together by hand. It was lit with colourfull lights.A closer look of the porcelin plates,cups and dishes.

Blessings of Qilin
Qilin are mythical creature of good kind.They are composite,beings often taking the head of a dragon and the body of tiger or deer.These creatures appear only,when wise King rules the Country.Among the four spirits(Dragon,Turtle and Phoenix) this ranks first..We can see these Qilin were  built out of 1000 medicine bottles filled with coloured liquids.They have been arranged beautifully and lit.

Blooming Lotus
After crossing these lions,we were captured by the pond of beautifull flower lanterns.Among those flowers,this lotus lantern is unique.It was blossoming and closing every other minute. 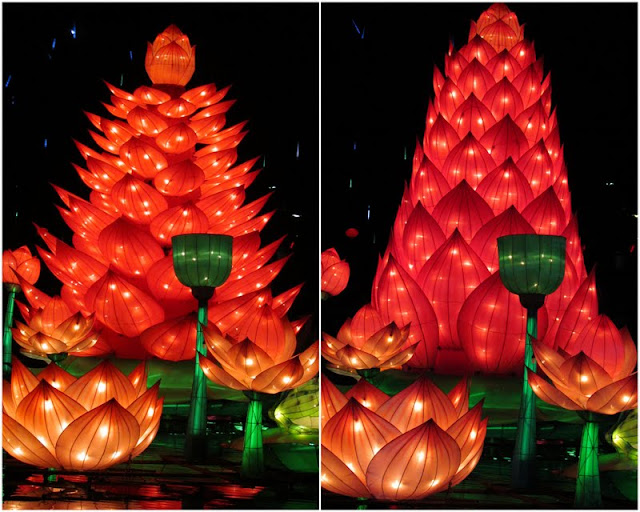 Lanterns showing the habitat of birds and insects.Cranes were beautifully.lighted and placed in middle of the pond.

Mushroom Garden has small and big mushrooms.These garden were decorated with colourful lights. 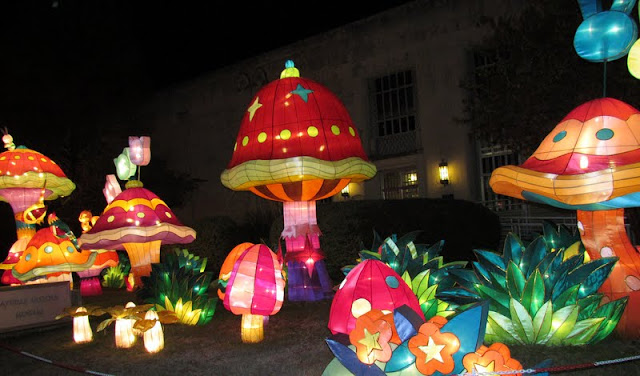 Ants on vacation
These lanterns comically shows ,what happens when ants are on their vacation.In the first picture,ants were playing see saw.Second picture ,they were carrying the bride ,hand to hand for the wedding.Actually we cant see her.She is in the parcel..Third pictures,shows how they dance for a wedding party.Fourth picture showh how these ants play violin. 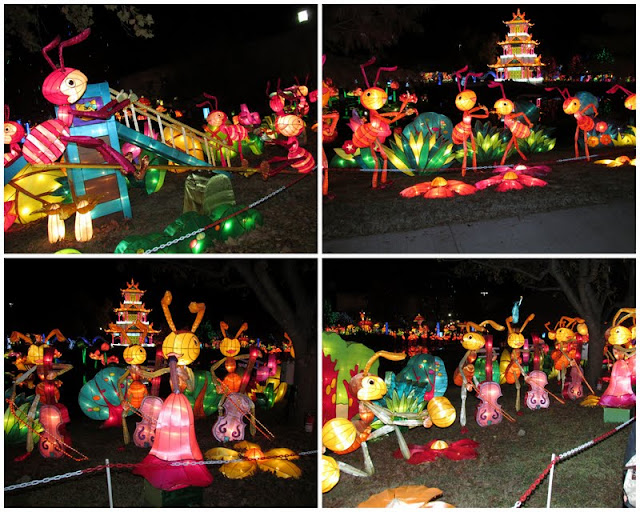 Charm of Magpies
Twittering on a branch full of plum blossoms,these birds foretell good things.Traditional Chinese believe these birds bring love,marriage,luck and good things.Plum blossom ,symbolizes for preserverance and hope,as it blooms amid the winter snow.A traditional fan is in the back drop 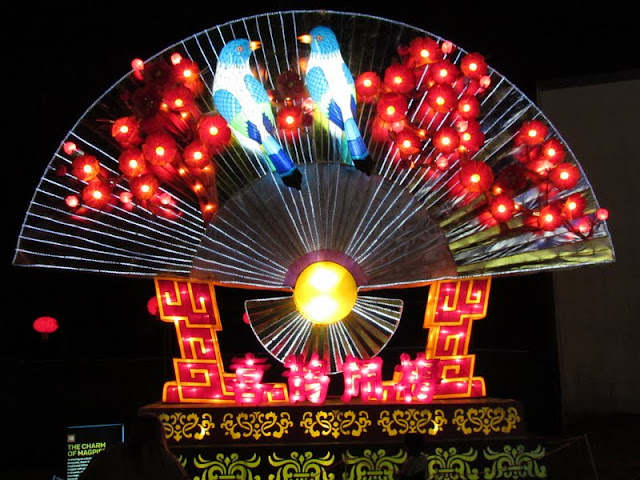 Glorious peacock
While the eagle is considered as the king of birds for N.America,peacock is for China,It is seen as the symbol of beauty and talent.Acccording to budhist monks.its a symbol of luck.This particular lantern has more than 10,000 welded points and required 40 days to complete. Chamber of Fairies
Lanterns portraying the structural aspects of chinese.This particular building is amazing ,with its beautful lightings.This picture is taken across the lagoon. 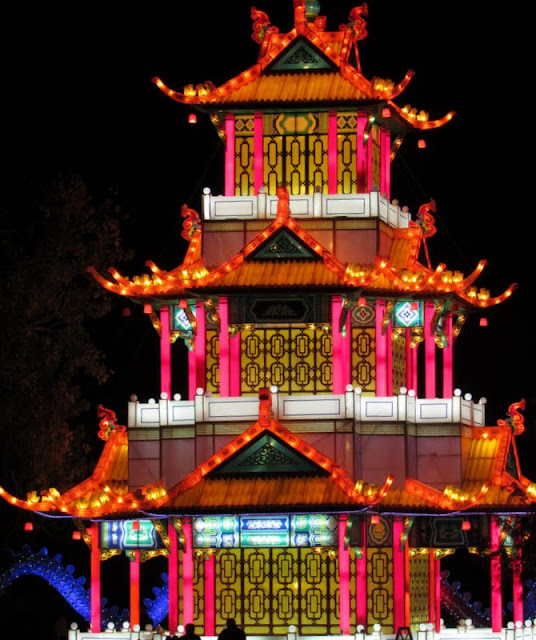 Temple of heaven
This has 600 years old history.The original was built as a complex structure.and this particular icon of China,is where the Emperor will pray for a very good harvest that year.The temple was burnt completely in 1889 and rebuilt out of wood .And one unique feature about this is,it is built without any nails.The blue roof indicates heaven .This particular lantern uses 900 lights to illuminate. 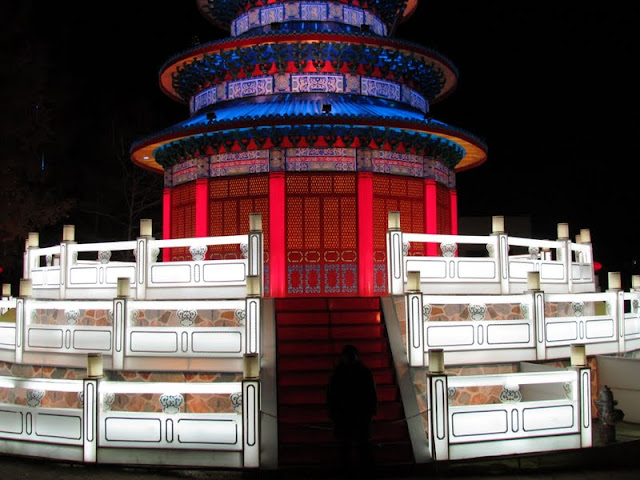 Faces of Peking opera
These lanterns show the faces of peking opera.Its a style of arising theatre/These are masks used for theatre performance in China.These masks are not worn,in ancient theatres.They were painted diretly on the performer's face. 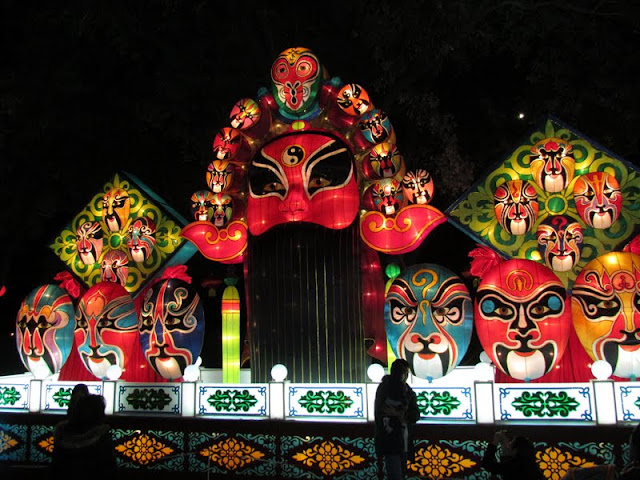 Tunnel of Lights
These lanterns are arranged as a tunnel of lights.The combination of red and pink lanterns are used. 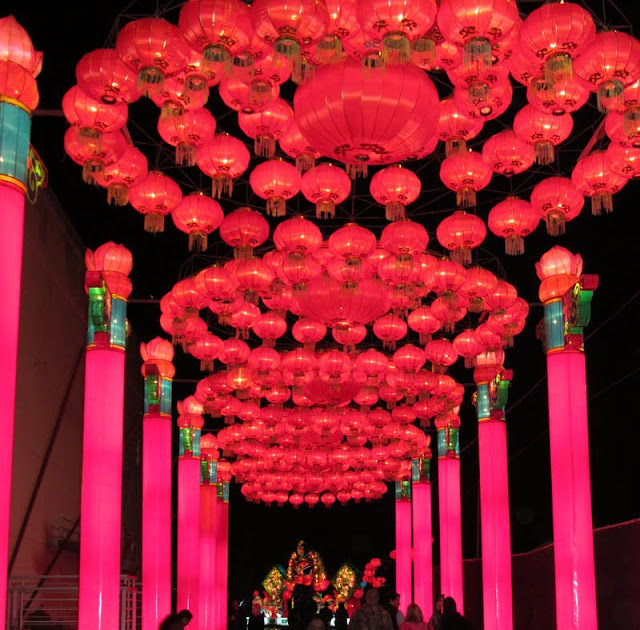 These shops were filled with antique pieces and hand ratfs.People were busily buying things from the shop.Most of these things were made up of wood and leaves.They are hand crafted . 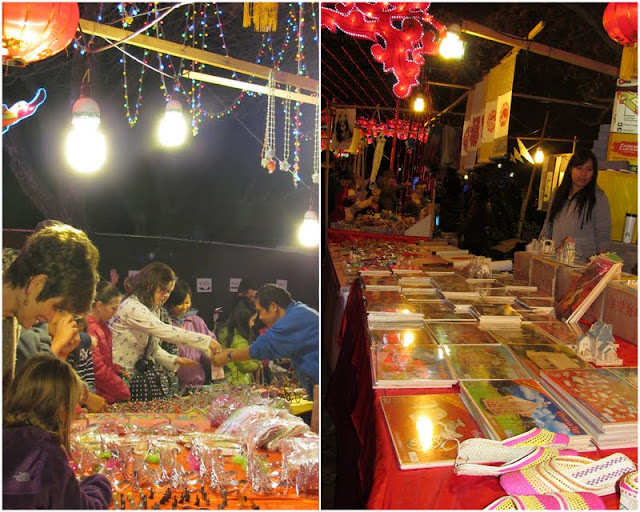 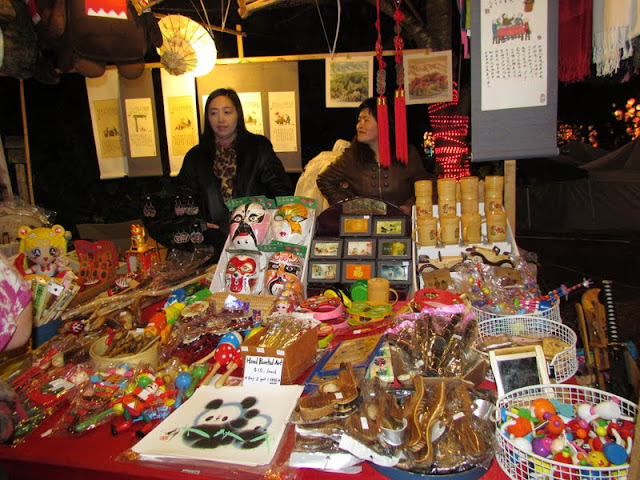 Here is a closer look of hand made baskets,slippers and jades.They were priced from $5 to higher.The picture with snake,is made out of single palm leaf. Every other insects were just made out of  palm leaves in front of us.The last picture shows beautiful jute bags .They are hand made too. 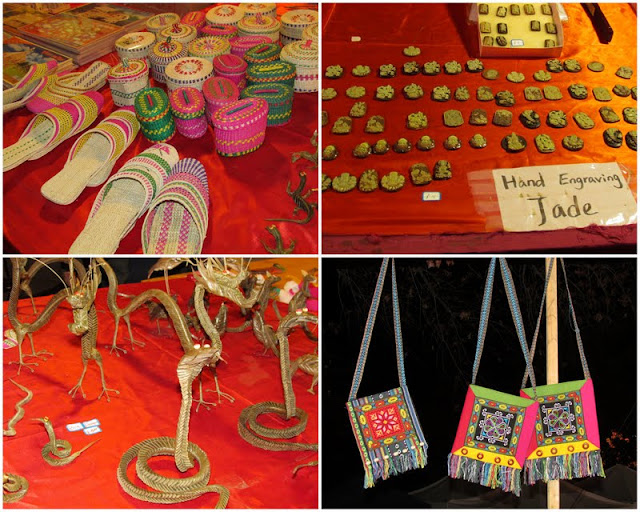 We had a wonderful day at the Dallas Trade Fair park.Worth watching it .Kids will surely enjoy this.There were food stalls too,which had fried rice,spring rolls,soups and beverages.
Posted by Unknown at 5:29 PM

Nice post Savitha. I have seen lantern festival in Montreal. This one is really fun.

Missed it...Thanks for sharing...Photos are so nice...

Good job..posts like these are most welcome..Awesomely done n kudos to ur efforts..

lovely pictures dear..Join me in Fast Food - Poha event in my blog.

Am living in Chinatown, obviously chinese festivals are truly very near to my heart. Catchy lantern festival.