Achu murukku or rose cookies are traditionally prepared during Christmas. It resembles like that of snow flakes. So its a tradition worldwide to make these so called " Fried Rosette Cookies" for Christmas.I tasted these murukku, when our Christian friends shared it for Christmas.My love for this has grown like anything. My mom will prepare these murukku and send it to me . But she will always complain the intense labour it involves. But the taste makes the work woth for it.Whenever ,I think of this murukku, it will be like a mountain for me. But when we dig into the recipes and tips, it becomes so easy. It also depends on the consistancy of the batter.I recently bought the mould from India. When I asked my mom for the recipe,she told me the secret of preparing rice flour at home. So prepared the flour at home and made the batter. At first , my batter became runny,so I started adding maida. If you want, you can prepare the murukku by using just rice flour and eggs without maida.The mould for achu muruku has to be immersed in oil for a day .Enjoy these achu murukku for this christmas. 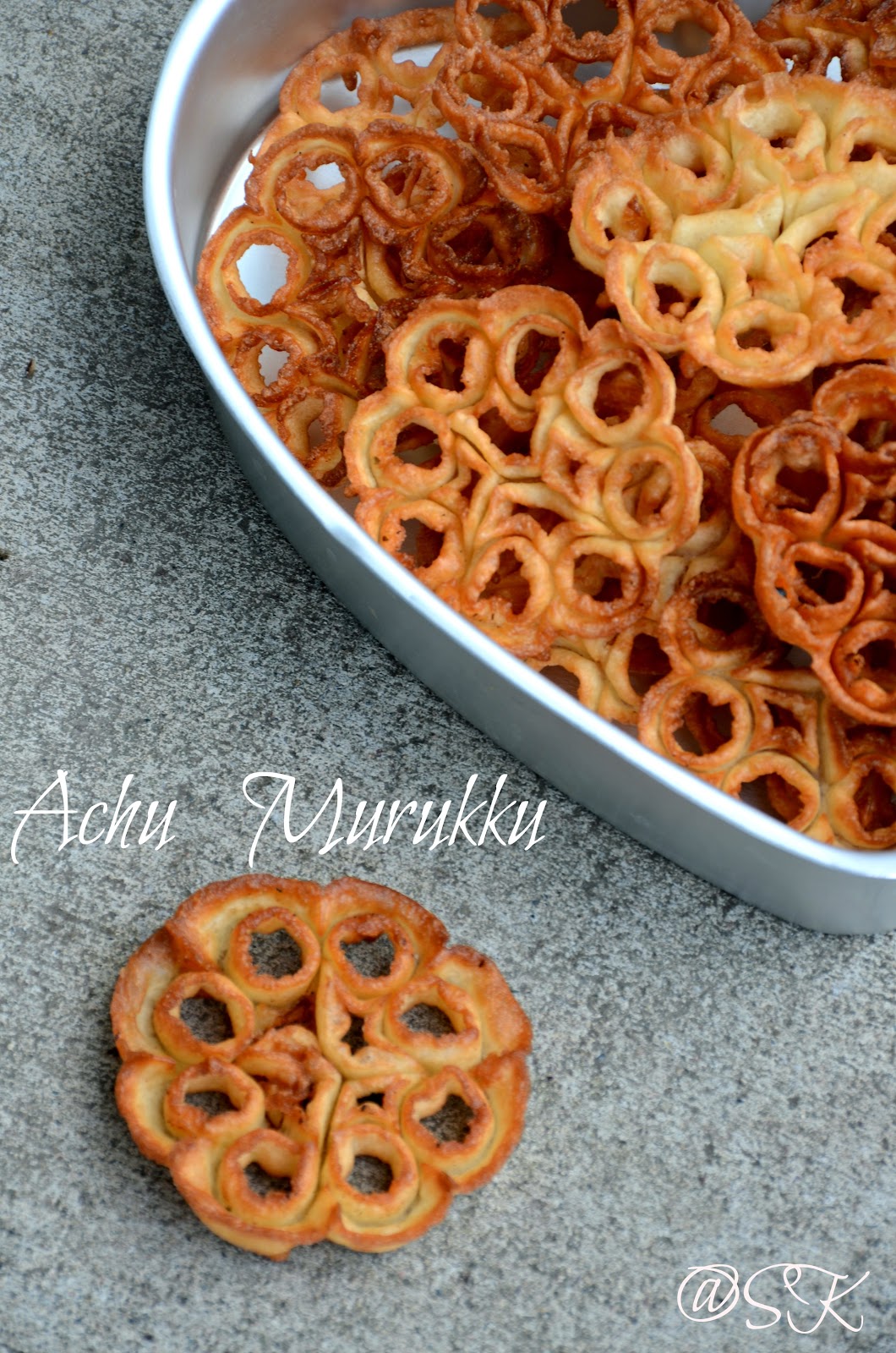 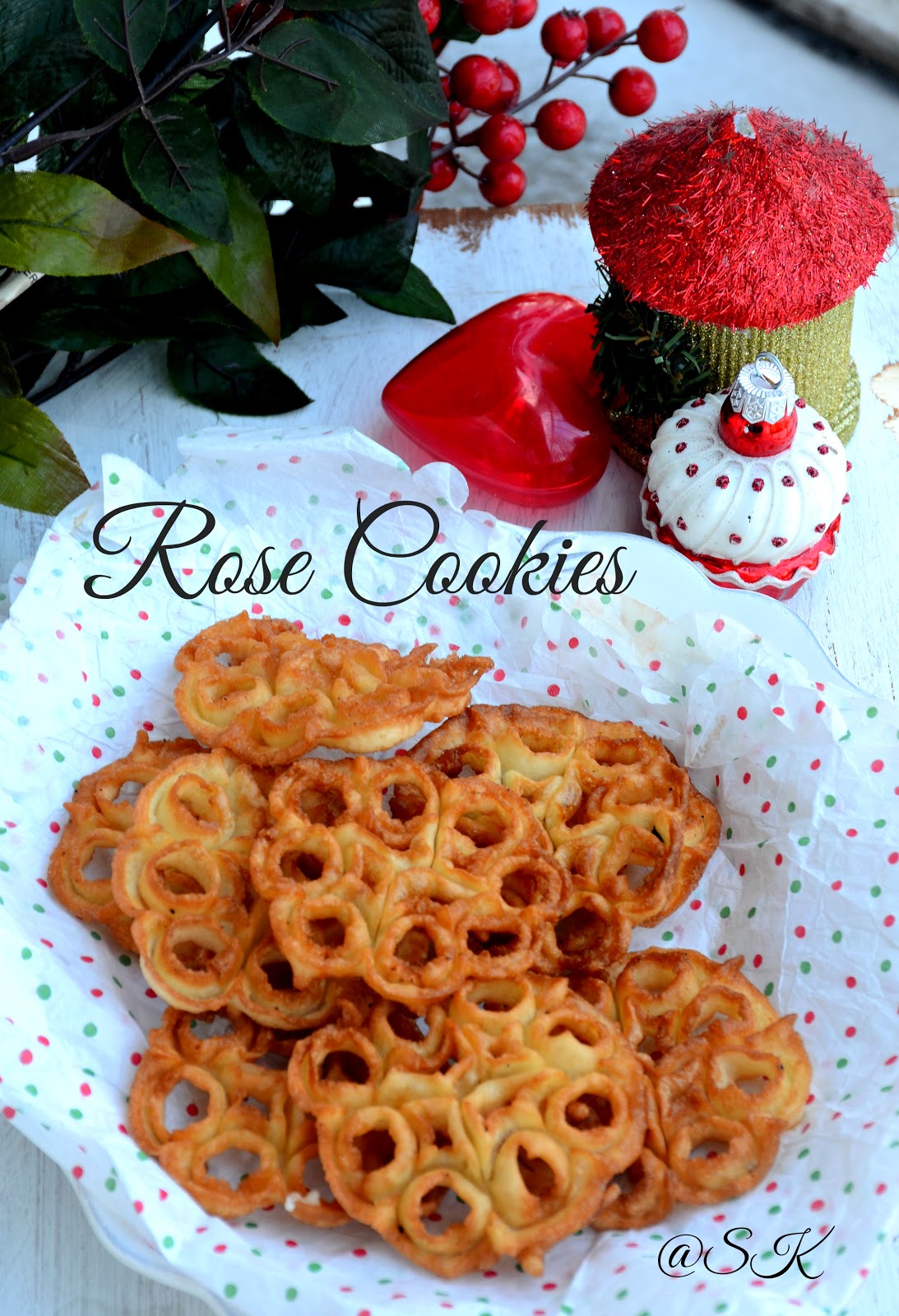 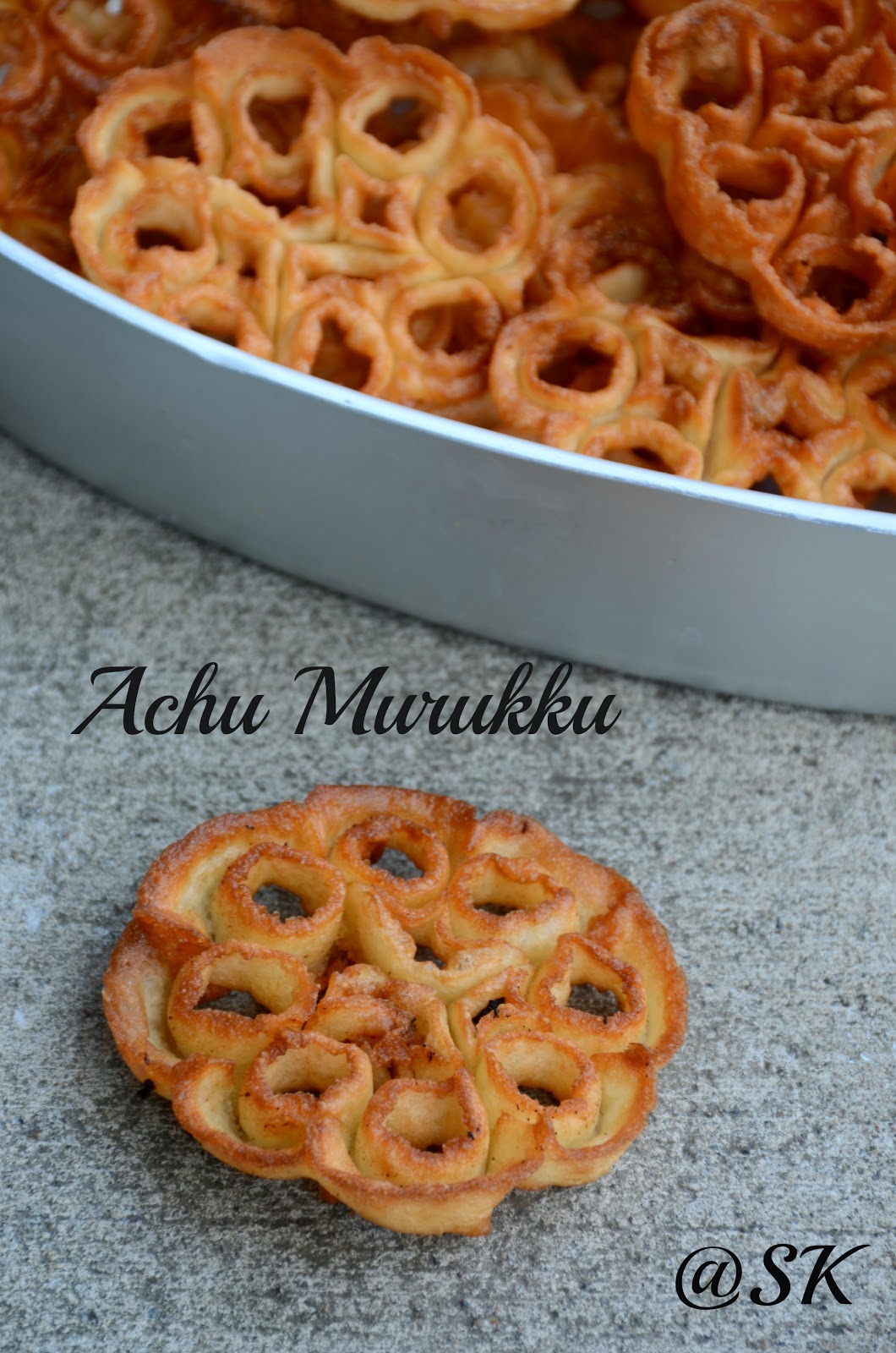 Method:
* Prepare the rice flour as in the link .The flour should be fresh and bit wet.So when you make the flour, immediately mix the ingredients .Don't let the flour dry.Store bought flour will not be suitable for making achu murukku. I used my new mould for making achu murukku.So I let my mould sit on a bowl of oil for a day.This will make our work easy. 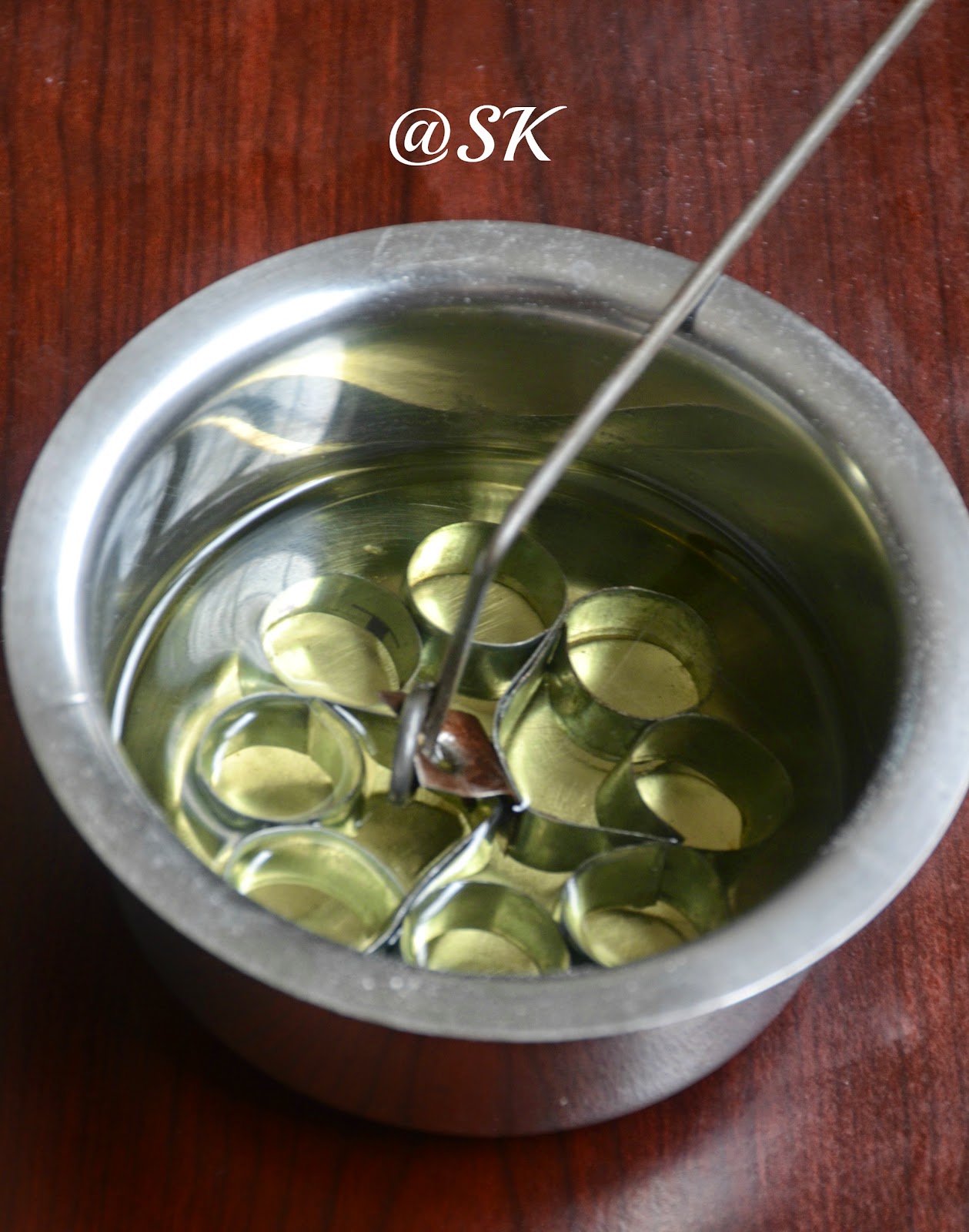 * Take a mixing bowl, add rice flour,salt,powdered sugar and maida.Mix them well.My mom used to prepare achu murukku using rice flour alone.But adding maida ,will give  volume to the murukku. When you think that your batter is bit runny, you can add some maida to make it thick.But never use store bought rice flour instead.It will make the murukku hard. 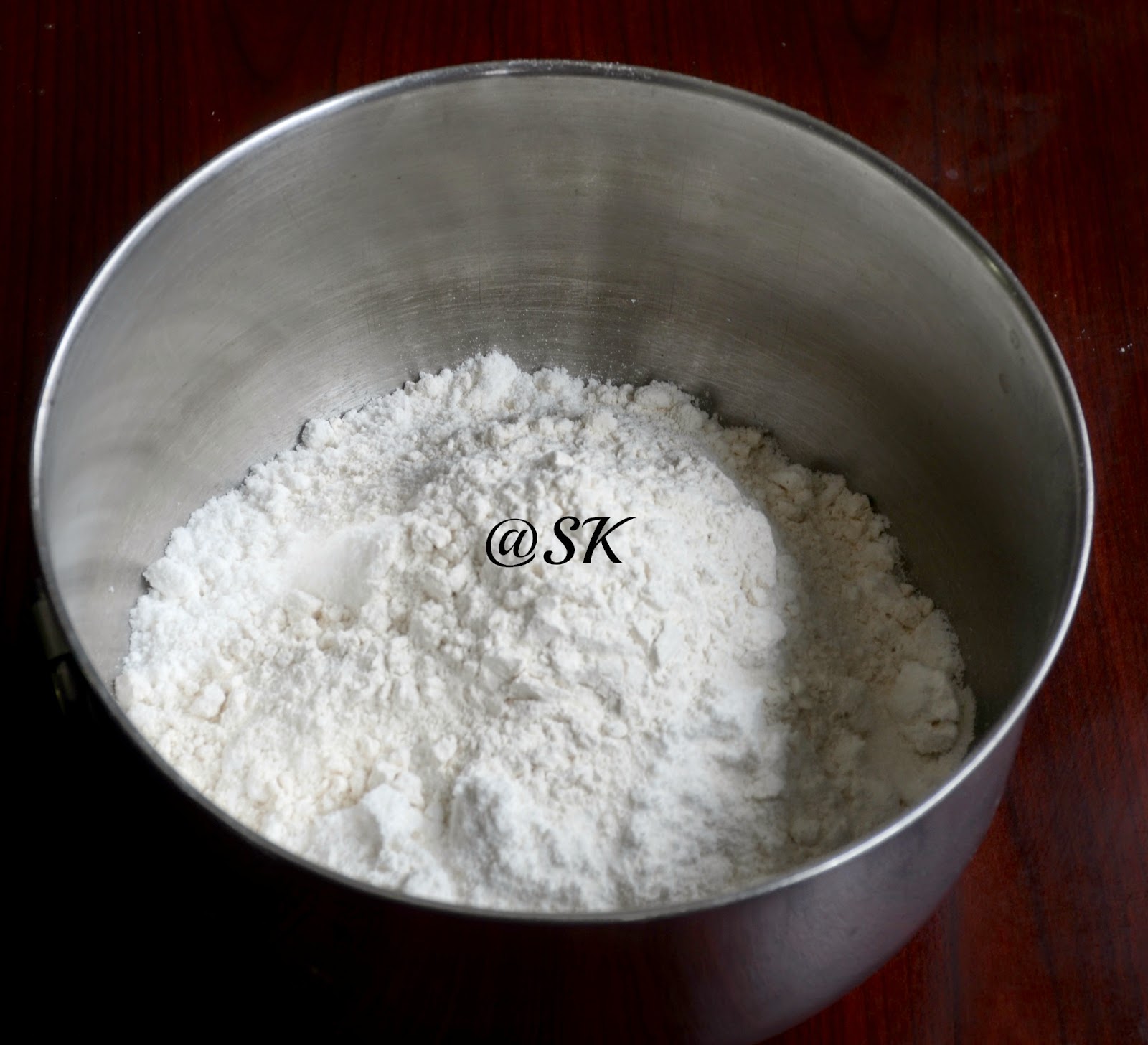 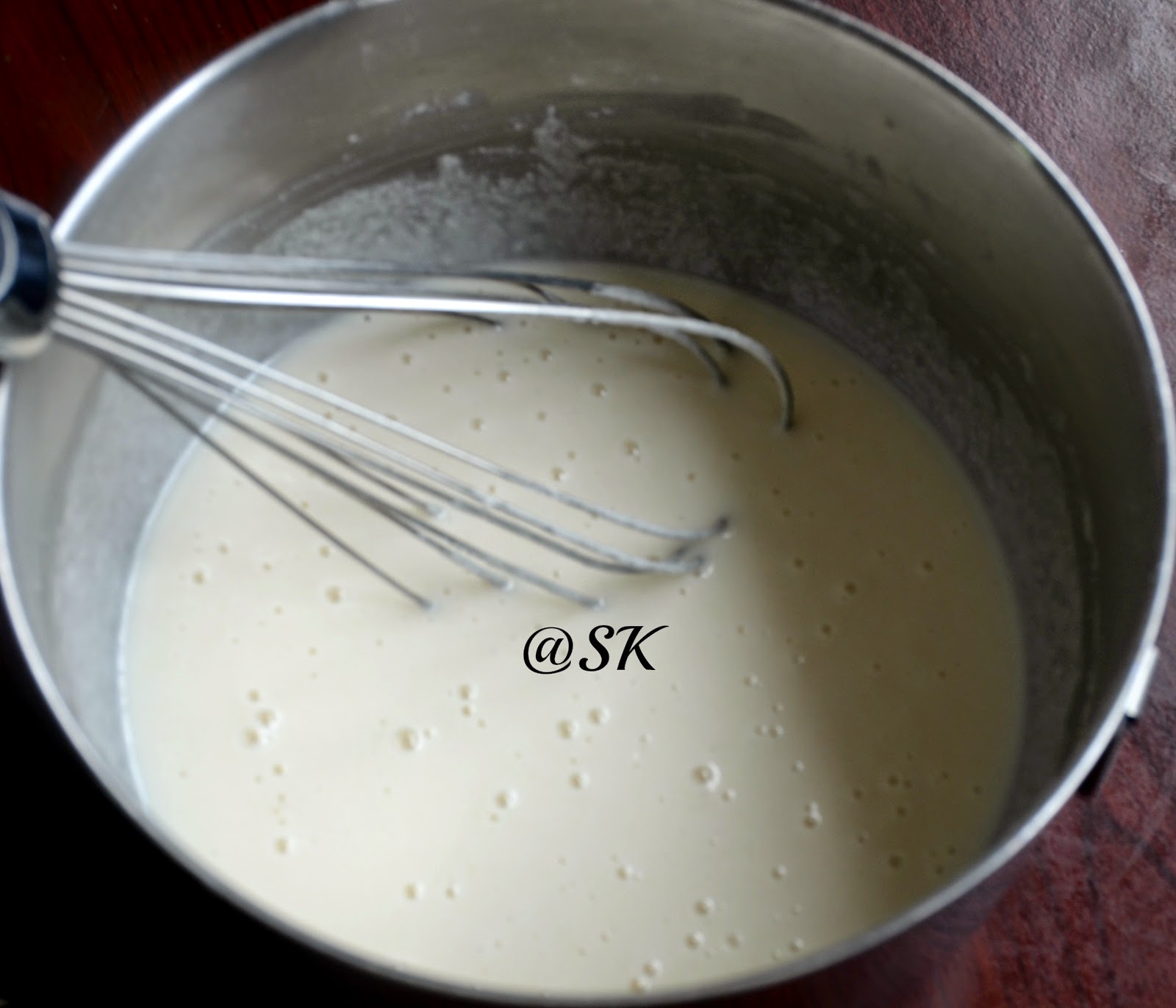 * After half an hour, heat a wide pan of oil. The oil should be atleast 2 inch in the pan. That is, the mould should be able to immerse into the oil. Heat the oil, immerse the mould into the hot oil.This helps us to drop the rosettes into the oil, without getting stuck to the mould. Just for a minute do this. 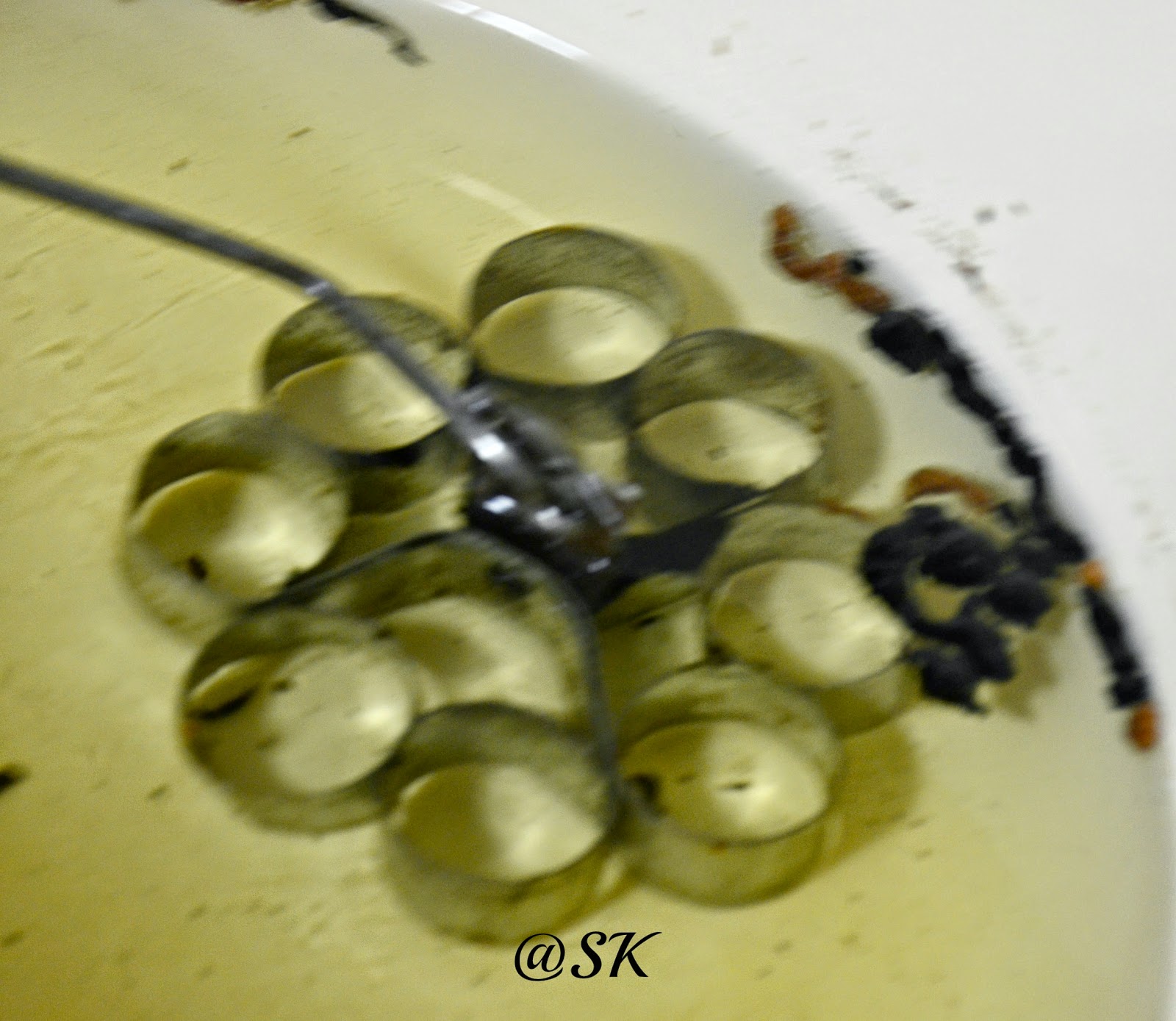 * Now add egg to the mixture and whisk it well.If you want to skip egg, then you can replace 1/4 cup of maida instead of egg. Eggs acts as a binding agent for the murukku. 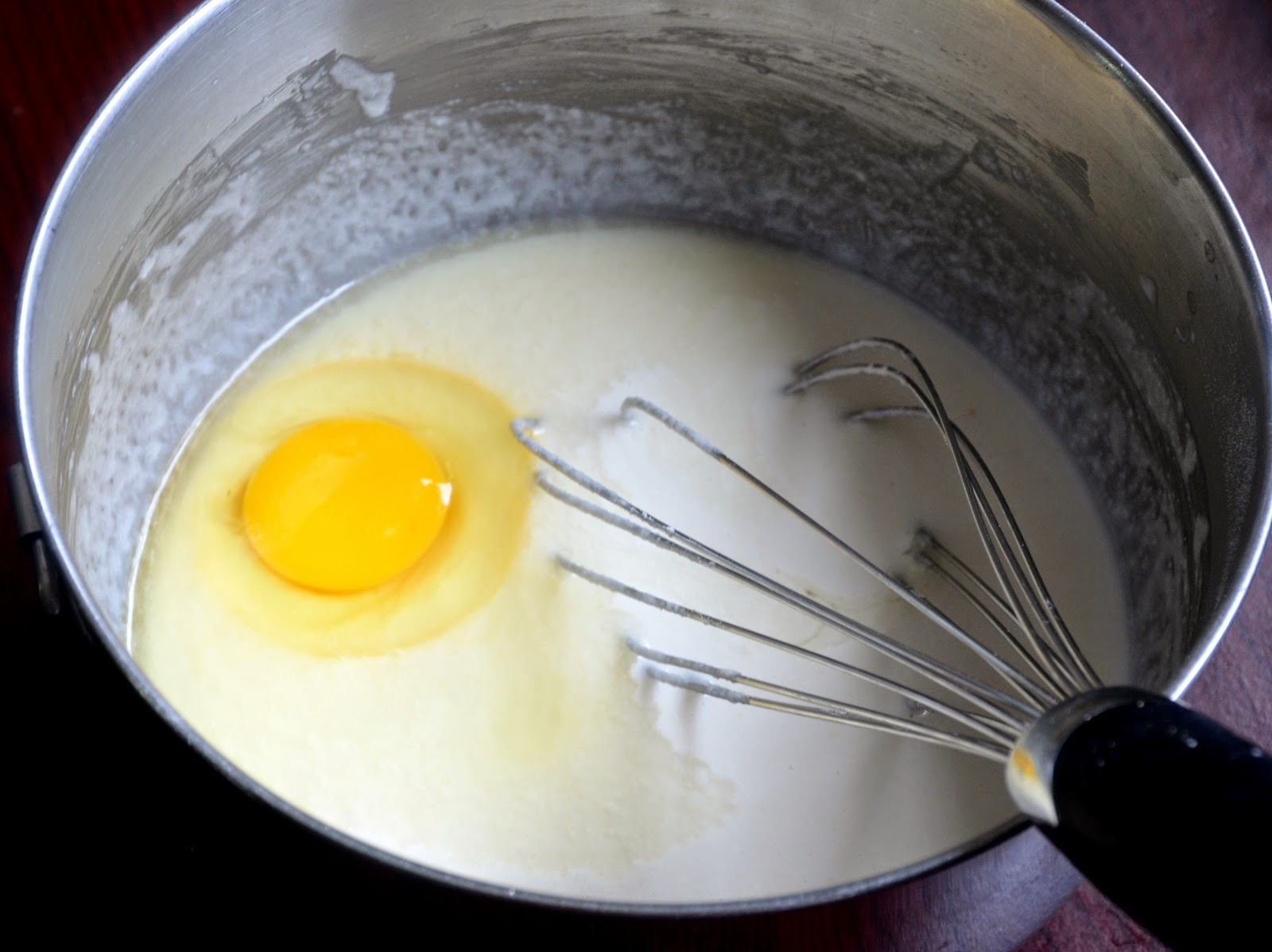 * Now dip the mould into the bowl. You will hear a hisss sound, since the mould is hot. Dip the mould, such a way that the batter coats 3/4 of the mould. Don't dip the mould fully, then the murukku will not get released from the mould.At this time, we can adjust the consistancy of the batter. If the batter doesn't coat well, then it is runny, so add maida. 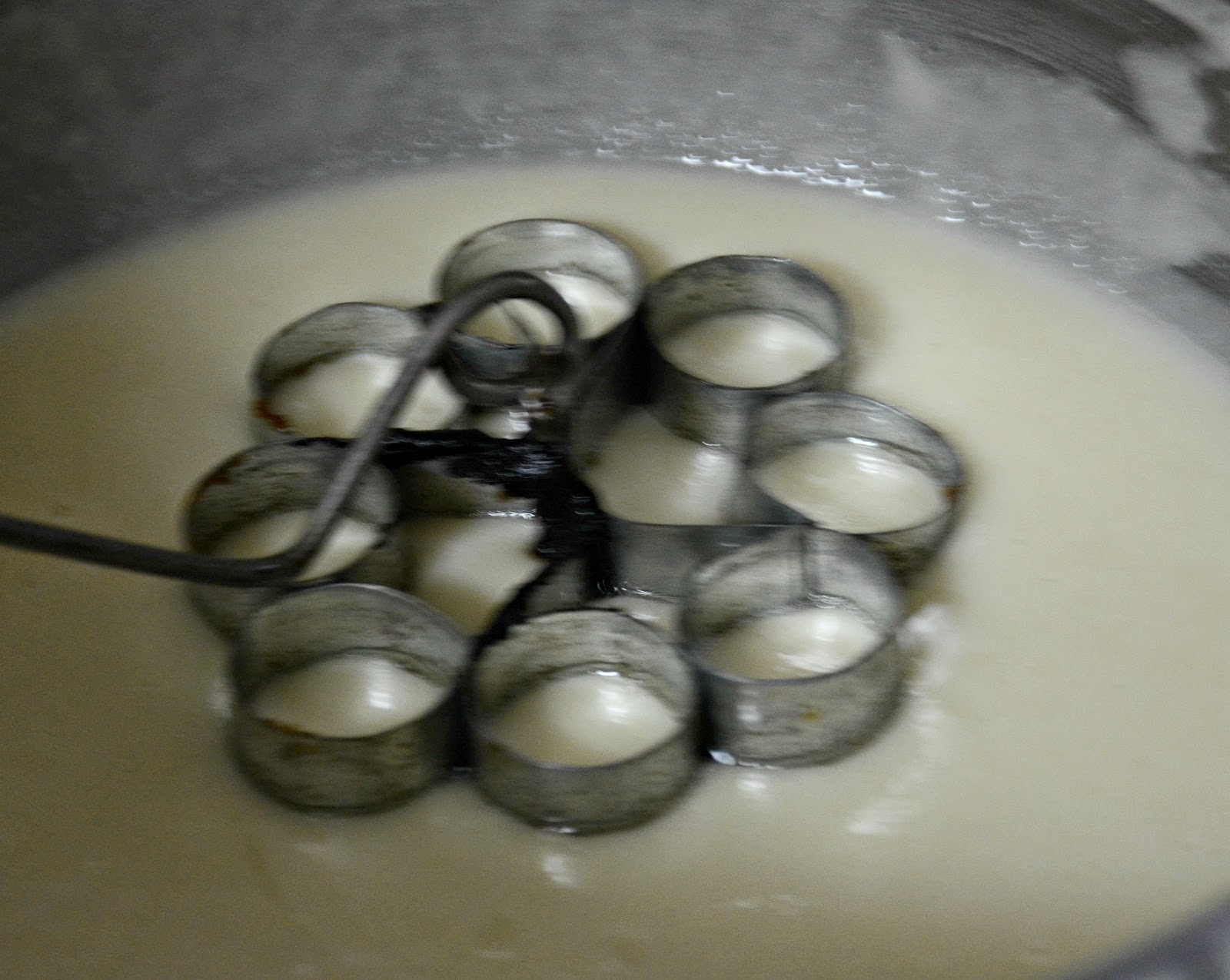 * Now plunge the mould with batter into the oil. It will cook instantly.Keep the flame always medium .If it is high, then the murukku will turn dark soon. 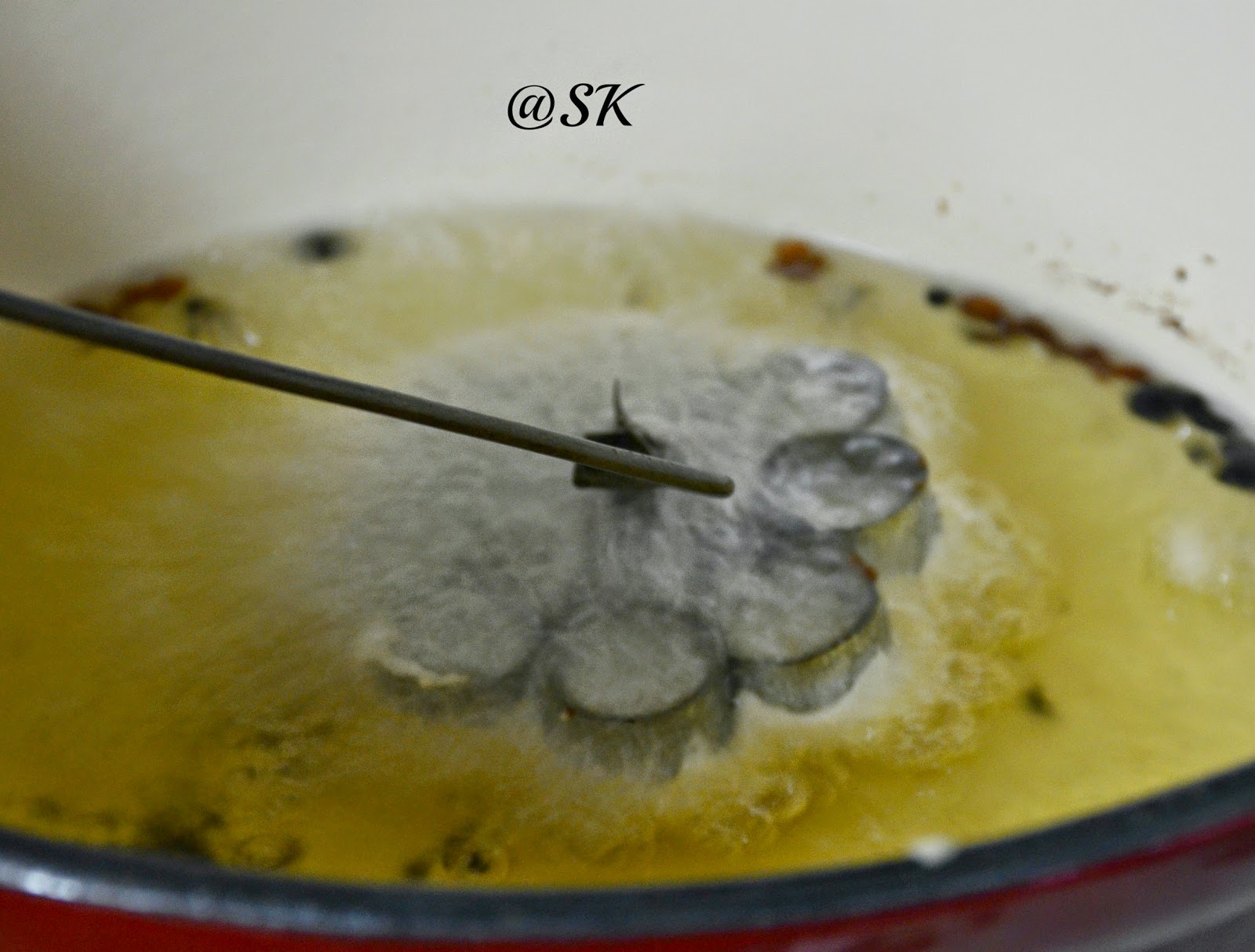 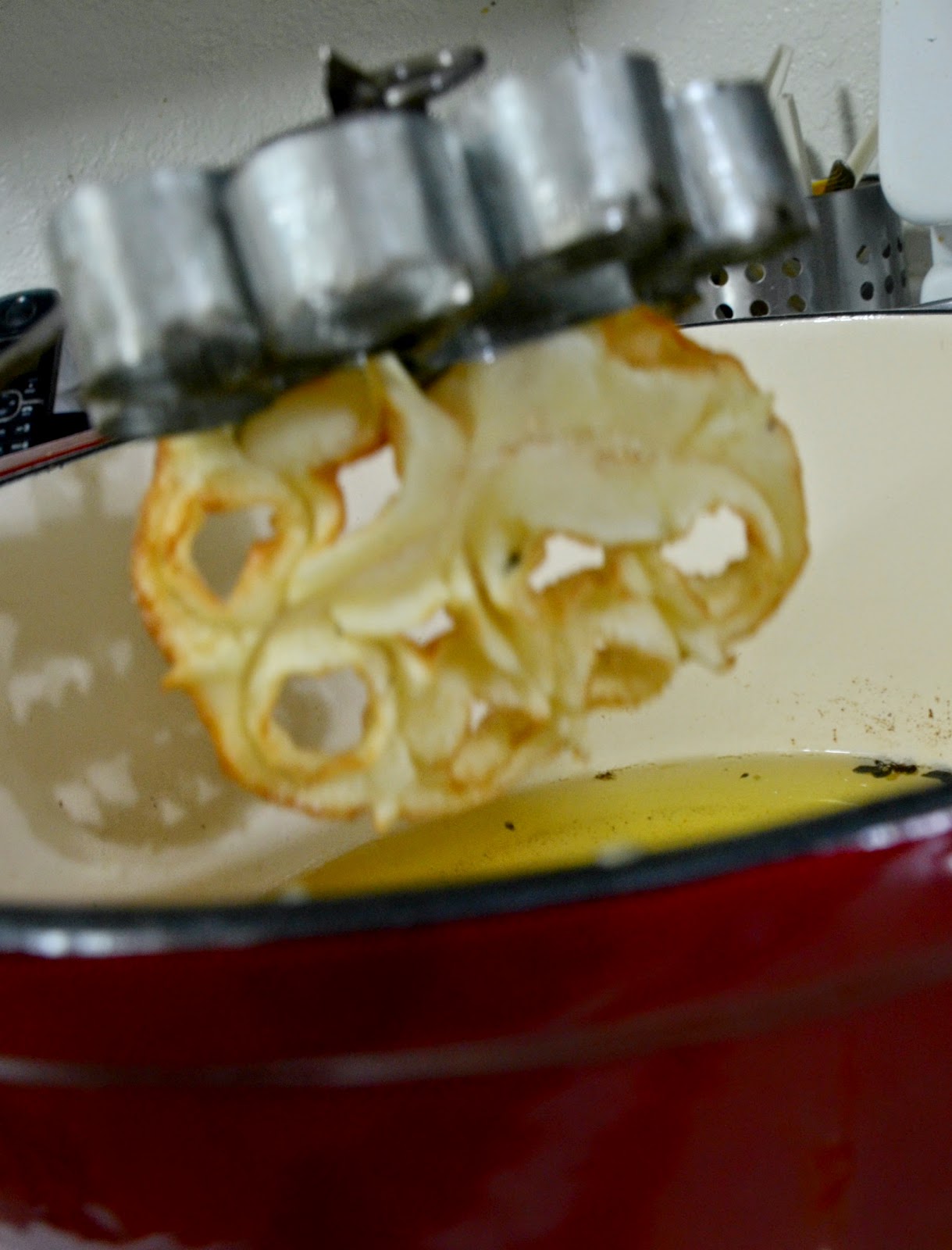 * Let the murukku gets cooked for a minute on each side in medium flame. Mean while, let the mould get rested in the hot oil for a minute. Remove the cooked murukku from the oil and strain them in paper towel.Initially, the murukku will be soft, after coming out of the oil, but after some time, it will become crunchy. So don't cook the murukku for too long, then it will turn colour. 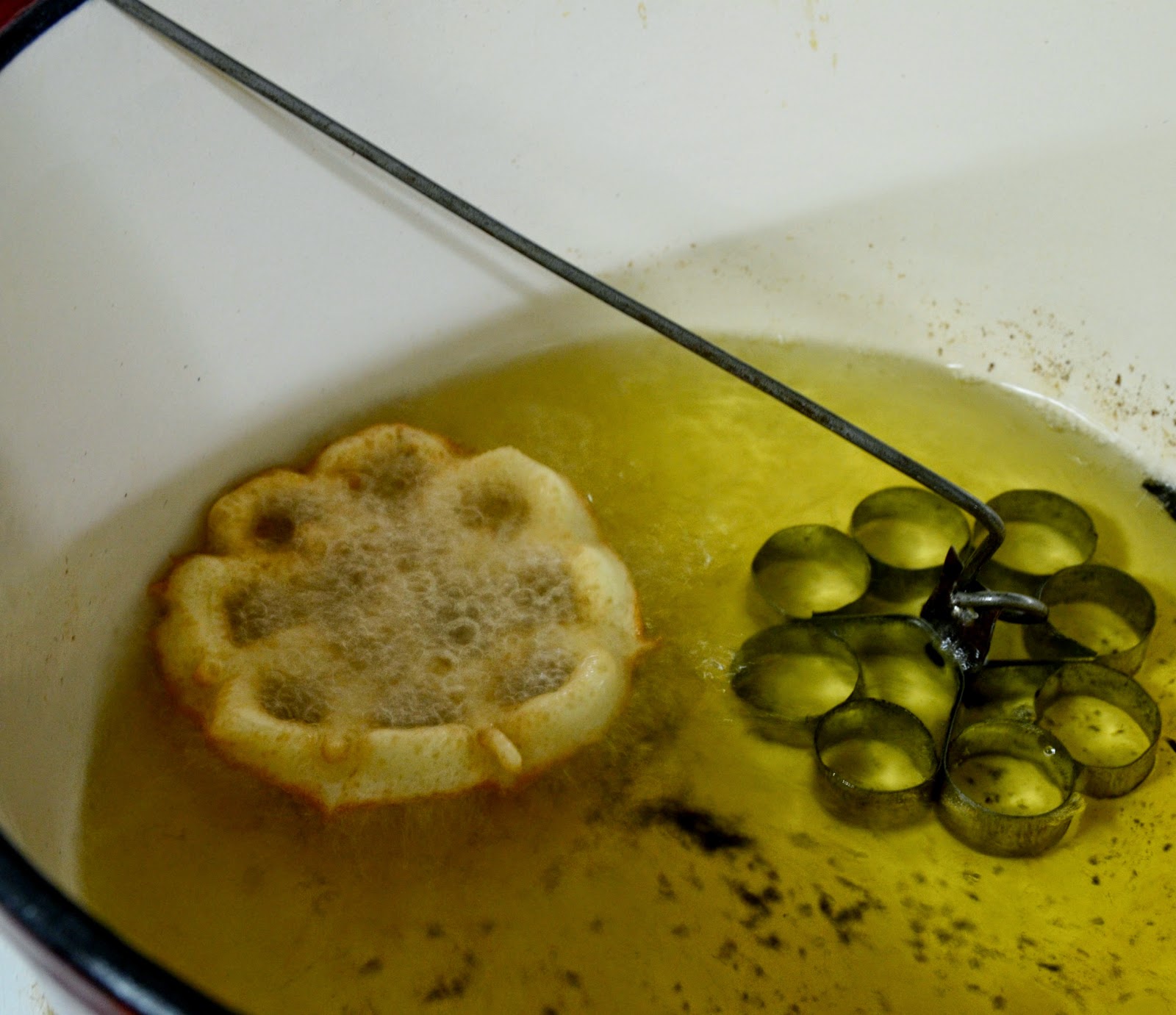 * Similarly, cook the murukku by dipping in the hot oil first and then into the batter. Strain thme in paper towel and store them in air tight container. They have to be cooled completely before storing. 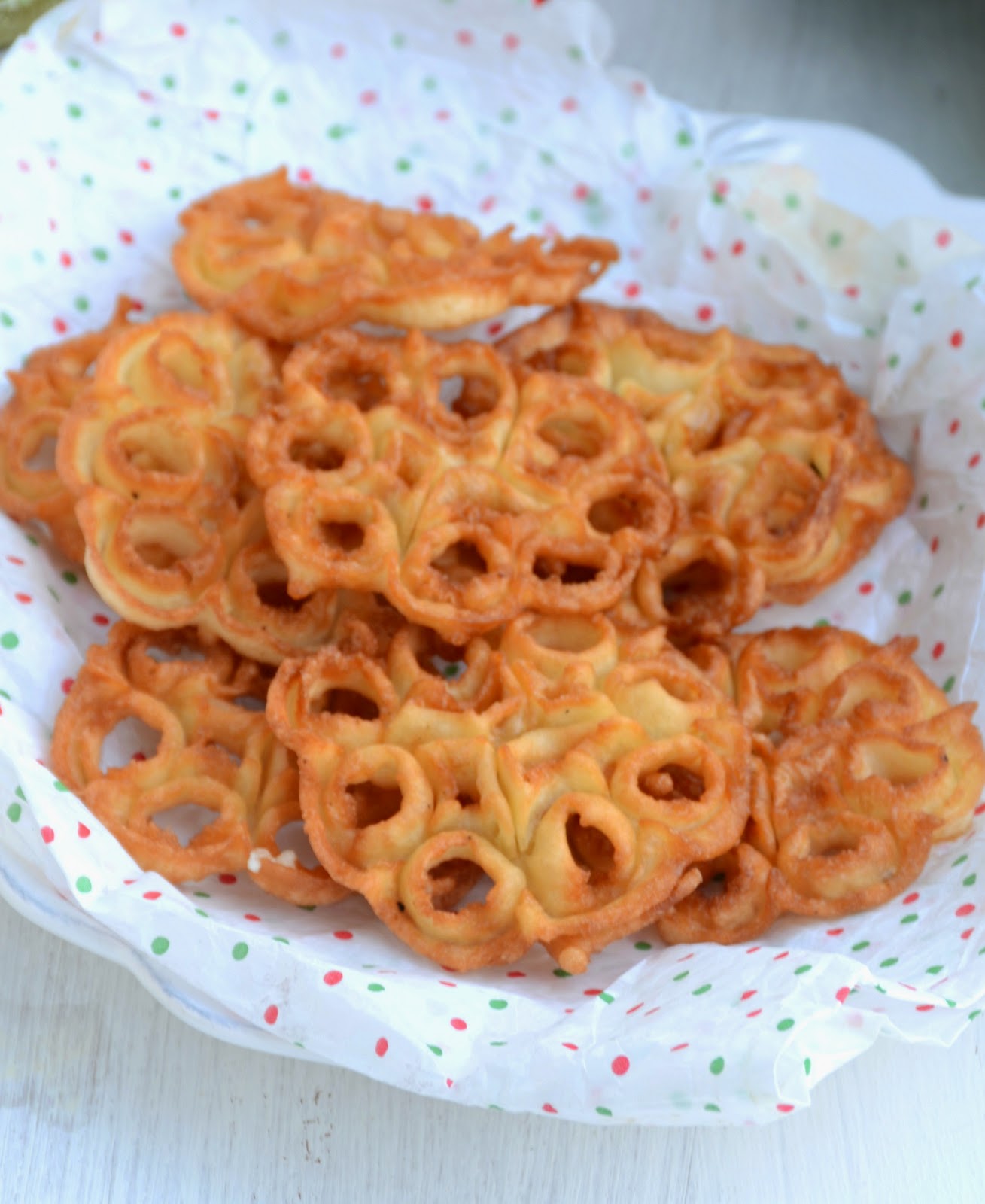 Notes:
* Perfect murukku depends on the  consistancy of the batter.It should not be too thin or too thick. If it is too thick, dilute it , by adding cocconut milk little by little.If it is too thin, add maida  .
* Rice flour has to be made at home, if not they will not be crispier.
* Let the batter be soaked for atleast 30 minutes, for the maida to blend with the rice flour in the batter.
* Adjust the amount of sweetness ,to your taste.
* I didn't had black sesame seeds, so I skipped it.
* Always have excess coconut milk with you.
* The mould can be soaked in oil for a day, for the mould to get used.
* Always cook the murukku in medium flame , if not it will turn dark soon.
* Finish this murukku within 3 to 4 days, as it has coocnut milk in it. 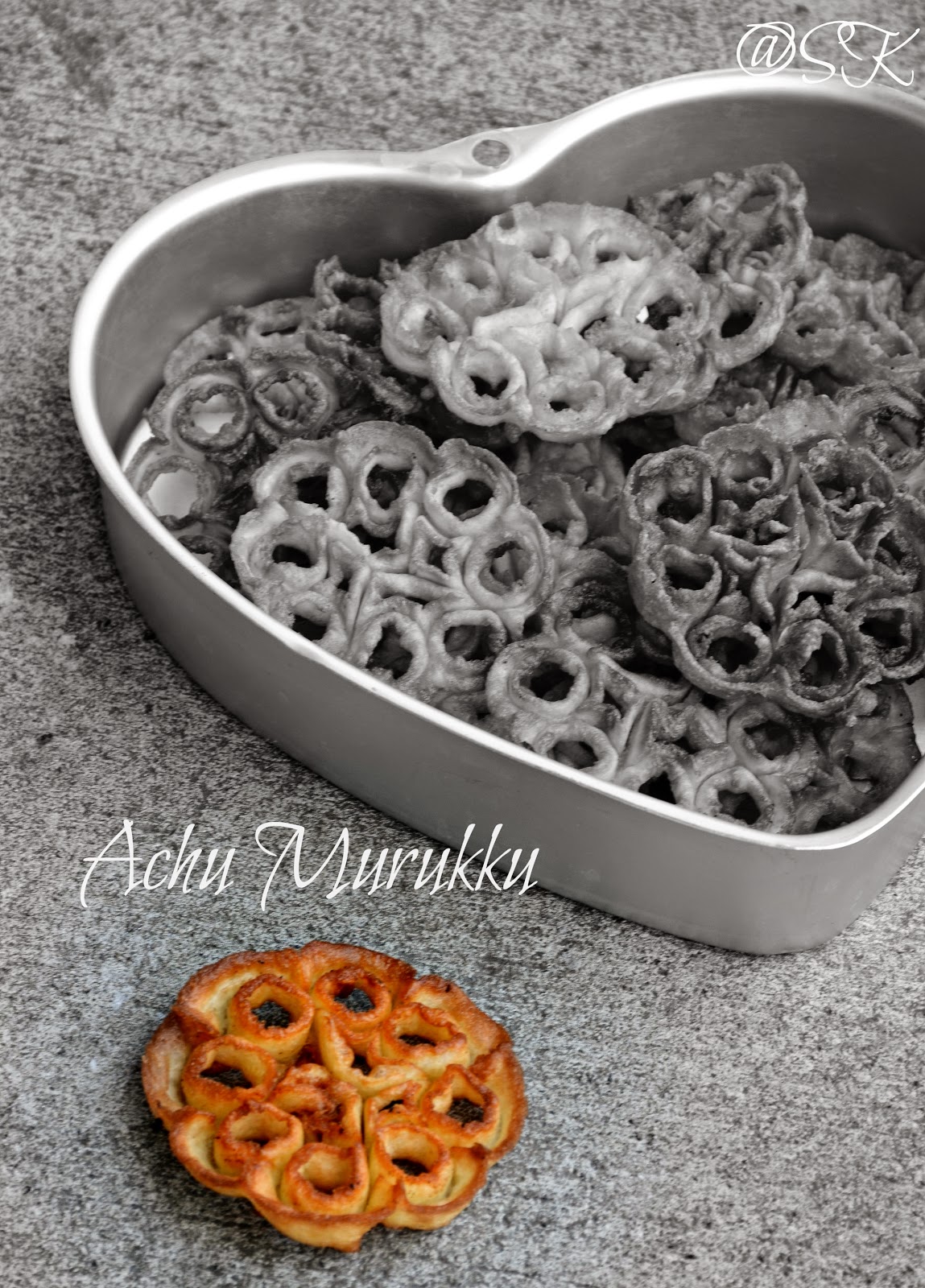 As a kid i always love this murukku ..Never know it is made with eggs ..Lovely tempeting clicks

super crunchy munchy achu murukku :) Savi aks kalakitingae. I had one failed attempt with this and lesson learnt is egg is a must in making these rose cookies. I think I must try your recipe sometime.